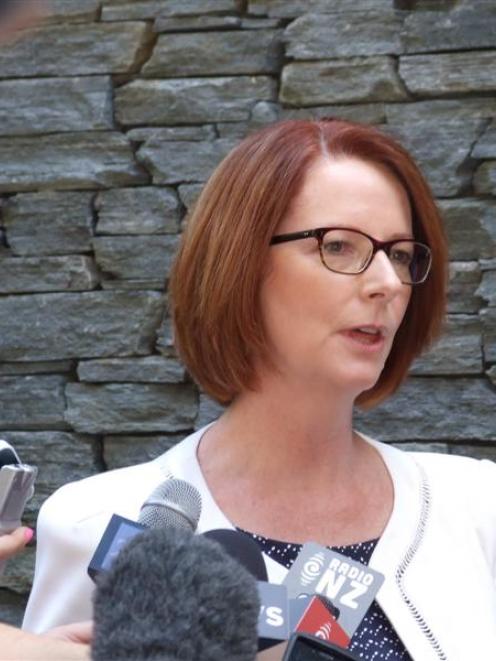 Australian Prime Minister Julia Gillard fronts a large media contingent at the Hilton Queenstown after landing in the resort. Photo by Christina McDonald.
New Zealand Prime Minister John Key and his Australian counterpart, Julia Gillard, say the integrity of sport is under a cloud in the wake of the Australian Crime Commission's report into doping and match-fixing in Australian sport.

Speaking in Queenstown yesterday, both prime ministers addressed the revelations from a year-long investigation, which Ms Gillard said had been ''pretty sickening''.

The report reveals there is widespread use of banned drugs in Australian professional sport, and that the practice has links with organised crime.

''I think all sports fans, including me, find this pretty sickening,'' Ms Gillard said.

''We are people who go and sit at grounds or watch sport on TV and marvel at amazing sporting prowess. We cheer on the deeds. And the sense that anything we've seen has actually been fuelled by banned substances I think would be pretty sickening for sports fans. It's pretty sickening for me.''

She did not have a personal message for Mr Key concerning the issue, but said the Australian Government would provide all the information it could.

The commission reported this week that the links between professional sporting bodies, the use of prohibited substances and organised crime may have resulted in match-fixing and fraudulent manipulation of betting markets.

''If you had asked me to make a guess about doping in Australian sport I wouldn't have intuitively come out with the work the crime commission and the doping agency have,'' Ms Gillard said.

Mr Key was so far not aware of any New Zealand sporting body or individual person caught up in the doping scandal.

''We have got no particular reason to believe there are issues but, obviously, we play Australasia-type sporting events.''

Mr Key said it was unhelpful for him to speculate any further, but admitted the two countries were ''highly integrated'' when it came to sporting codes.

On the subject of New Zealanders living in Australia, Ms Gillard has made it clear she has no appetite to change their entitlements.

Ms Gillard said Australia's special relationship with New Zealand was already reflected in the special visa category which has been given to New Zealanders entering Australia since 2001.

It allows them to work without restrictions, as has long been the case, but prevents them receiving entitlements that permanent residents and citizens automatically receive - such as social welfare benefits, access to student loans, emergency housing and future participation in the national disability insurance scheme. Ms Gillard said New Zealanders' ability to work without restriction in Australia was a benefit no other country received.

''Because of our special relationship we have arrangements for New Zealanders that have a generosity associated with them that is not given to any other nationals from any other country when they come to Australia.''

''It is a relationship we don't accord to any other nationals from any other part of the world.''

However, Mr Key said he would like to see the matter addressed and mirror New Zealand's treatment of Australians living here.

''There are one or two anomalies at the moment and from New Zealand's point of view we would, of course, like to see those resolved, but we always stand by the view that it is for the Australian Government.''

Of the 500,000 Kiwis living in Australia, about 100,000 of the more recent arrivals have lesser rights than the others.

Mr Key said the New Zealand Government's treatment of Australians would not change.

''I am happy with the situation, just hopeful at some point the situation might be resolved on the other side of the Tasman.''

Both prime ministers were keen to discuss asylum seekers, economic relationships and the 2015 Cricket World Cup today in Queenstown.