Excited at opportunity of a lifetime 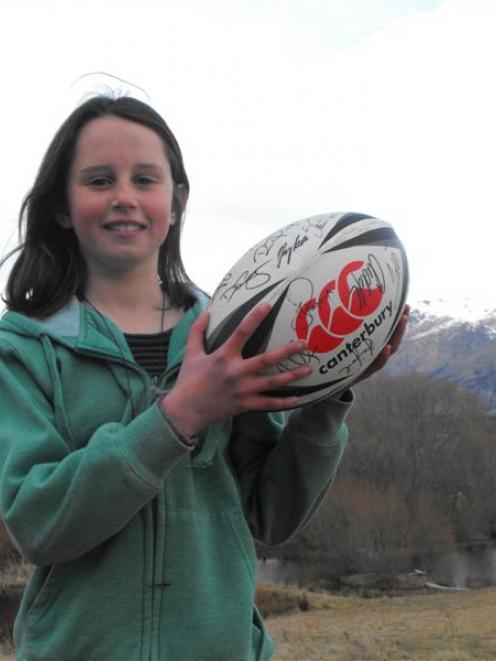 Zoe Hart, of Arrowtown Primary School, will be representing Central Otago at next Friday's opening of the Rugby World Cup at Eden Park. Zoe will hold the hand of Tongan captain Finau Maka as the team walks out to take on the All Blacks. Photo by Olivia Caldwell.
Zoe Hart, of Arrowtown Primary School, will not only be attending a Rugby World Cup match, she will lead the Tongan rugby team on to Auckland's Eden Park for next Friday night's opening match.

Zoe (10) was nominated by her aunt, Liz Hart, of Auckland, to be one of the 96 "ANZ future captains" who would lead out a World Cup captain during the tournament.

Zoe was selected to feature in front of millions of viewers and is excited.

She will walk out next Friday night in front of a huge Eden Park crowd holding Finau Maka's hand.

Although she is helping Tonga, there is no doubt who Zoe will be backing.

"I want the All Blacks to win." Despite that, Zoe continues the Hart family's relationship with the red and white nation.

Her uncle, Ben Hart, was the Tongan flag-bearer at the 1987 World Cup in New Zealand.

Zoe's father, Nick Hart, had already bought tickets to the match for himself and his brother Ben, but now his wife Robyn, Zoe and son Toby (7) will join him in returning to their original home of Auckland.

The Harts moved from Mt Eden at the beginning of the year, and so they are familiar with the rugby atmosphere of the refurbished Eden Park stadium.

For Zoe, this will be one trip back home she will never forget.

"I will remember this forever."

Each winner will lead out a Rugby World Cup captain for a pool match somewhere in New Zealand.