Exhibition gives peek inside the lodge 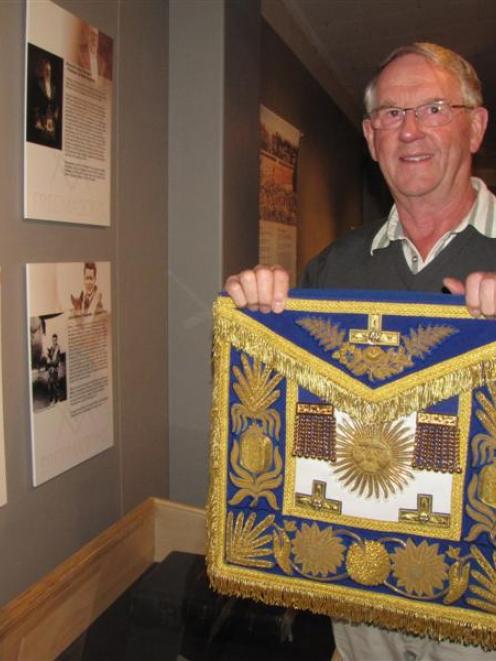 Lodge Arrow Kilwinning No 86 secretary Bob Russell, of Queenstown, presents a grand master's apron, one of the exhibits rarely seen by the public, in "Square and Compasses: Freemasonry in New Zealand", now on at Lakes District Museum in Arrowtown. Photo by James Beech.
Demystifying one of the oldest institutions in Arrowtown and exposing what its fraternity is all about are the aims of the latest exhibition at the Lakes District Museum, a member and the museum director say.

"Square and Compasses: Freemasonry in New Zealand" delves into the rich history, symbolism and community roles of the invitation-only, charitable but confidential society.

The exhibition consists of furniture, ceremonial objects and clothing and interpretive text.

A DVD tells the stories of the restoration of the lodge of Arrow Kilwinning No 86 last year.

Lodge secretary Bob Russell, of Queenstown, said he was surprised by the exhibition and learned a few things.

"I thought it was pretty interesting," the lodge member of 44 years said.

"The DVD is as much a history of Arrowtown as the lodge building."

Lodge membership was an early form of insurance for workers and their families, which continued today.

"In the case of the Wakatipu and the wider Central Otago, lodges were some of the first buildings built and the Freemasons were among the first groups of citizens to meet in an organised way to improve the community they lived in.

Many of the lodge members were also the first civic leaders."

The exhibition runs until November 28.

Entry is by gold coin donation.