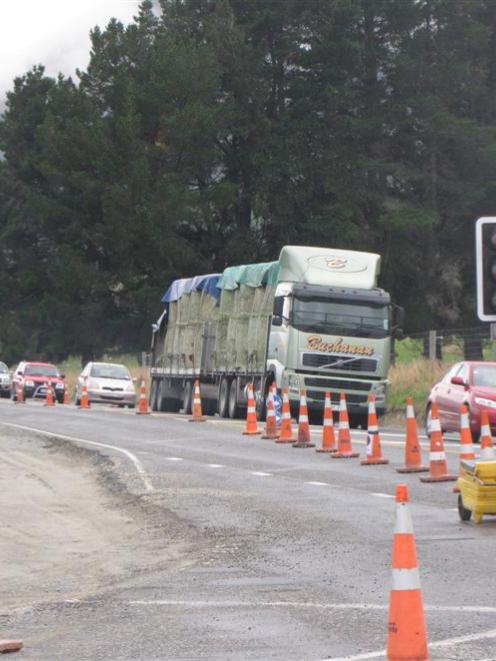 Road-widening work continues at Jacks Point intersection on State Highway 6 south of Frankton. Photo by Matt Stewart.
The seal of the busy main road into Queenstown will "fall to bits" if it is not resurfaced in an essential $700,000 project before this winter, the New Zealand Transport Agency says.

The agency was asked yesterday to explain why its contractors will resurface Frankton Rd, which will slow traffic down, during the resort's peak summer season.

The two-stage resurfacing work is programmed to begin on Monday, January 31 and finish in late March.

A total of 4.5km in the 70km zone of Frankton Rd, between Spinnaker Bay and Yewlett Cres, will be chip sealed then covered with a thin asphaltic surface "to produce a quiet and smooth ride", agency project manager John Jarvis, of the Dunedin regional office, announced yesterday.

Reducing traffic to one lane would be avoided at peak times. The median flush along most of Frankton Rd allowed enough space for a third lane, Mr Jarvis said.

"There should be reasonable two-way flow most of the time.

"It will just be a bit slower and there'll be traffic management in place."

Frankton Rd is the main artery into Queenstown for commuters and tourists.

It is one of the busiest roads in Otago, carrying an average of 16,500 vehicles every day, according to official agency traffic counts for 2009.

"There's really no good time in Queenstown, other than it obviously has to be done in good weather in the summer," Mr Jarvis said.

When he was asked why the resurfacing could not be done at night, he said the health and safety of contractors was the issue.

"It has actually deteriorated this last winter," he said.

Mr Jarvis said Frankton Rd was already starting to crack and was at the end of its life. The road surface was all new 10 years ago. It had a second coat nine years ago, but no further comprehensive work.

"You're doing well to get eight years of life out of a seal with that much demand, particularly with the winter permafrost conditions. "It will fall to bits if we don't attend to it before the next winter; we know that because it's got some little potholes and failures in it already."

The 2km upgrade is split into 800m from Lakeside Estates and 1.2km around the Jacks Point intersection and involves pavement rehabilitation and road widening.

The road will be rebuilt under seal, then gravelled and given a new sub-base.

Mr Jarvis said he expected the project would be complete by March, weather permitting.

The agency will take the resurfacing project as an opportunity to slightly adjust the width of the lanes to accommodate a dedicated 1.5m-wide cycle lane on the hill side, heading out of Queenstown.

Cyclists will continue to use the shared footpath on the lake side of the road, as there was not enough space to create a separate cycleway, Mr Jarvis said.