Funding welcome; Govt could do more 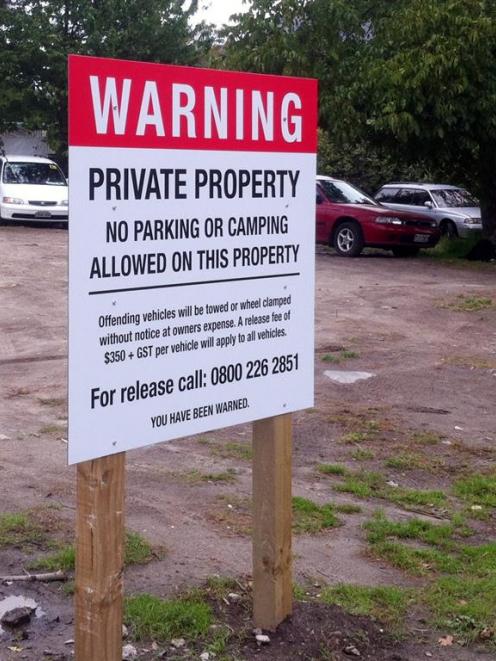 A bare section in Queenstown’s Park St was vacated by freedom campers after this sign was erected. Photo by David Williams.
The Government needs to do more than help pay for toilet blocks and facilities to tackle freedom camping, Queenstown Lakes Mayor Vanessa van Uden says.

On TV3's The Nation at the weekend, Prime Minister John Key said there was an argument councils in tourism hotspots such as Queenstown and the West Coast needed government support to help deal with freedom campers.

Asked what kind of support, he replied: "Well, it's money isn't it, ultimately.''

Ms van Uden said the prospect of extra funding was welcome, to ease costs on ratepayers.

But the Government could help deal with other freedom-camping issues, she said, including the standardisation of rules across the country and assessing appropriate camping sites.

"Every local authority has different rules, so for visitors you don't know when you've crossed over between Queenstown Lakes and Central Otago do you?

"I think there would be a lot of advantage from having one set of rules.

"It's not just a case of putting in more toilets and more facilities. There's stuff about where are good places for freedom camping to be.''

She said it was a positive sign the Government realised it needed to be part of the answer to freedom-camping issues.

"We'd love to see the Government establish an infrastructure fund that councils could apply to, but we'd like it to be far wider than just freedom camping.''

In 2005, the Government established the $11 million tourism demand subsidy scheme, which subsidised water and wastewater projects in popular tourist areas such as Hanmer Springs and Franz Josef.

But many unlawful campers just skipped the country without paying, prompting the council to start clamping from late last year.

Several free camping issues in and around Queenstown hit the headlines last week.

They included up to 200 people a night staying and partying at a free camping ground at Gibbston and dozens of cars crammed on an empty section in Queenstown's Park St.

The latter case appears to have been resolved.

The landowner has posted signs warning that vehicles parked illegally or being used for camping would be towed or clamped.

Ms van Uden said a mixture of people had for years camped illegally in sheltered spots around the district, but issues with people sleeping in cars on bare sections in central Queenstown had not cropped up before this summer.