Hearing on plans to move church 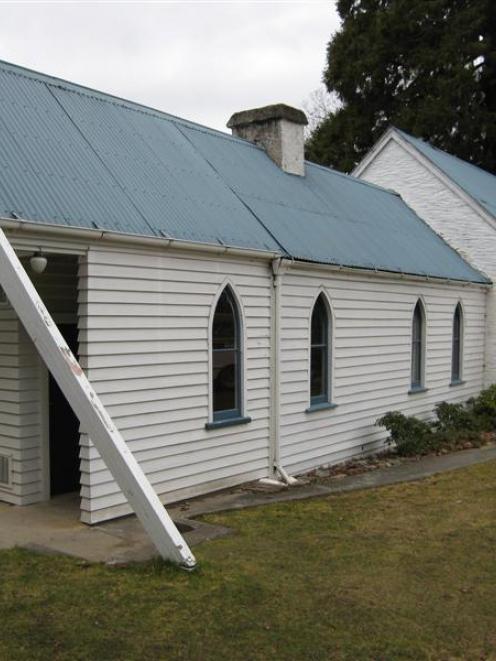 The hall at the rear of Arrowtown's St John's Presbyterian Church, which was built in 1871 as the Millers Flat church. Photo by Jude Gillies.
Plans to move the 139-year-old Millers Flat church from the historic St John's Presbyterian Church site to a site behind Adams Cottage, on Arrowtown's Buckingham St, will be heard in Queenstown on Friday, February 19.

Commissioners Andrew Henderson and Christine Kelly will chair the hearing, at the Crowne Plaza hotel, from 11am.

The commissioners approved plans by the Otago Foundation Trust Board to build a new $1.4 million community hall next to St John's, restore the church building and convert the existing vestry from a hall to a church office, in September 2009.

Mr Henderson and Ms Kelly also gave consent approval, with conditions, for a cafe and art gallery to operate in Romans Cottage and for Adams Cottage to become professional offices, in October last year.

Planning consultant Blair Devlin, of Brown & Pemberton Planning Group, will address district plan concerns on behalf of the applicant, the Arrowtown Trust, at the relocation hearing next week.

The trust wanted to move the timber church and use it for small-scale commercial activities as part of the public heritage precinct being developed.

Queenstown architect and historic buildings specialist Jackie Gillies will explain on behalf of the trust the historical significance of the church, which was was built at Millers Flat, below Coronet Peak, in 1871.

It was moved to Speargrass Flat Rd in 1950 and was relocated again in 1959 to the St John's site, to be used as a church hall.

Mr Devlin said while the trust was the applicant, the church and the Otago Foundation Trust were the driving forces, because they could not begin construction of the new hall without the removal of the old hall.

The move was also a condition of their consent.

"The proposal keeps [Millers Flat church] accessible to the public, whereas the alternative option is to sell it to someone privately and it could potentially be lost to the community," Mr Devlin said.

The application was publicly notified in late November and eight submissions were received by Lakes Environmental by the deadline of January 13.

Moving the church near Adams Cottage would be "inappropriate" because of its size and the confines of the section and the historic open space behind would be lost, they submitted.

They raised the issue of pedestrian safety on Romans Lane if couriers made several deliveries a day.

The trust had not identified the type of tenant who would lease the church, the frequency of deliveries or the effect of having more pedestrians in the area, the lodge owners said.

Mr May and Ms Sly requested 10 conditions if the application was granted.

They included limiting hours of church activity, defining its intended use and confirmation the trust had funds and was able to complete the project in a reasonable amount of time.

Mr Patton said he would discuss the issues and conditions of the lodge owners with them this week.

Mr Devlin said most of the lodge owners' conditions would be imposed by Lakes Environmental.

Arrowtown resident Karen Swaine said if consent was granted, no further development in the historic precinct should be considered until a management plan was developed and implemented.

Ms Swaine said she would also speak at the hearing.