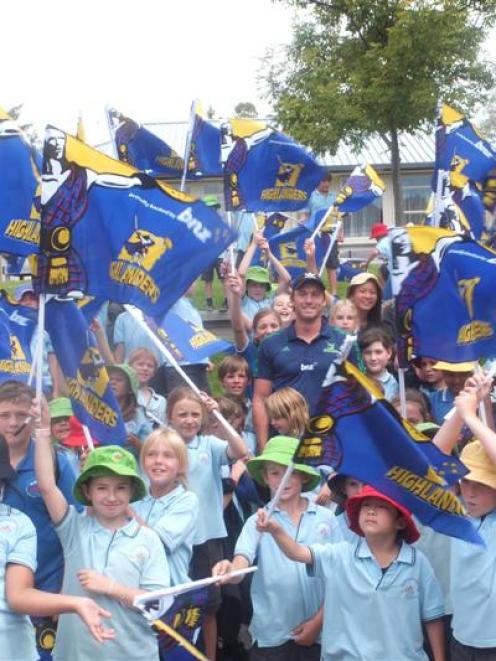 Injured Highlanders fullback Ben Smith is surrounded by hundreds of excited rugby fans at Queenstown Primary School yesterday afternoon before the pre-season match against the Blues, in Queenstown. Photo by Olivia Caldwell.
The Super 15 season gets under way this weekend, and rugby fever came to Queenstown yesterday, when the Highlanders hit the resort for their last pre-season match.

Queenstown embraced the event, with a vocal crowd of more than 4000 spectators attending.

The crowd was filled largely with families at the earlier hour of 5.30pm, and showed great support when the Highlanders had the ball in hand and looked likely to be in for the win throughout the second half.

The Blues took the match from the home side in the last minute with a penalty 40m in front of the posts, winning 31-29.

If disappointed with the result, the younger fans did not show it as they mobbed the players on the paddock after the final whistle. Most popular with were Highlanders Brad Thorn, Ma'a Nonu, Hosea Gear and former captain Jamie Mackintosh.

Earlier in the afternoon, injured Highlanders fullback Ben Smith visited Queenstown Primary School to promote the team and the beginning of a highly anticipated season.

Smith stood in front of the school of about 600 pupils to answer questions about why he became a rugby player, what he does apart from rugby, the hardest team he has played and his favourite All Black friend.

His answers, for the record, were he was introduced to rugby as his brother's tackle-bag, he plays golf when he can, the Crusaders ''when they're on fire'' and Aaron Smith, ''but we're all good mates''.

Smith, who is in his fifth year with the Highlanders, advised the children to give every sport a go before pursuing just one and said he hoped for a successful Super 15 season under coach Jamie Joseph.