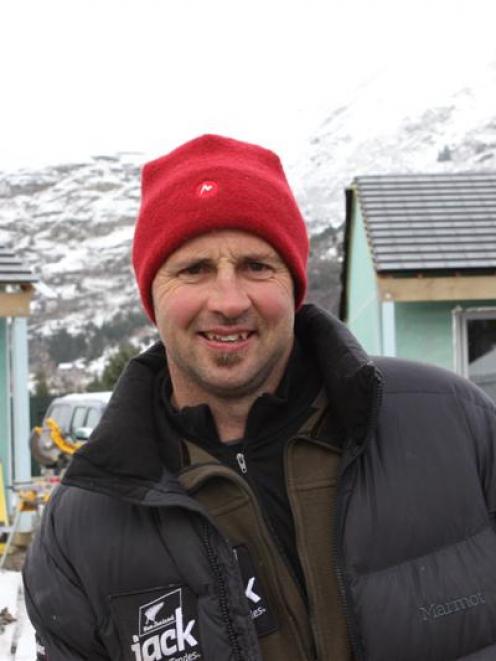 John Cocks, Cocksy of 'Your Home, Your Castle' fame, in Queenstown earlier this month filming 'Jack of All Trades'. Photo by Jude Gillies.
The Queenstown Times caught up celebrity builder John Cocks when he was in town for his latest TV appearance (as a judge and adviser on the series Jack of All Trades, which starts on TV2 on September 6).

QT: What did you have for lunch today?

JC: I'm a shocker. I don't have lunch, or breakfast. I nibble on fruit and crackers all day. If I have lunch it's usually a salad roll. I take raisins and nibble all day.

I can go through to the afternoon and ask 'when's lunch?' because I just don't eat much in the morning. I don't have breakfast. I'm not a breakfast person.

QT: What is your favourite food?

There's no recipe - you just make it up as you go along. I don't have a recipe.

QT: Is that what you do when you are building?

JC: No, with building you're always following the plans.

QT: What is your favourite spot in the Wakatipu?

JC: I'm lucky. I've been to Queenstown a few times.

I've been there three or four times with Ladies Night at Carters [building] and I brought the family down for a tour.

For most people, I guess the snow is the big draw. That's the thing that attracts people but I surf.

I'm an ocean person, but to actually see the snow on the buildings and cars and things was quite cool. You don't see that up the Coromandel.

JC: It probably needs less snow when you're trying to build, but then it made it more challenging.

If Queenstown needs less of anything, it's probably people.

QT: Who or what inspires you?

I heard him speak once and he inspired me. I dreamt I was going to be on TV and I've done that for years now.

Maybe it's time to do something different. You can dream what you want and make it happen.

QT: What are you reading at the moment?

JC: I mainly read non-fiction, people who have come from adversity and done well. I'm reading A Piece of Cake by Cupcake Brown. She's an Afro-American who became a lawyer.

JC: Fishing and surfing. And my kids. Taking them and their friends fishing. Kids keep you grounded.

My favourite place is up the Coromandel. I'm from Cooks Beach.

I'm a small-town person. It keeps you grounded.

People think if you're on TV then you live in Auckland and live the big city life but I live in Tauranga and drive up to Auckland for work.

We have a holiday home in Tairua and when you come from a small town you get to mix with everyone.

I still play rugby with guys I grew up with. In a small town you get company executives playing rugby with drainlayers.

We need more of that, instead of people putting themselves on different shelves and saying "you can't mix with me on my shelf".

QT: What winds you up?

QT: What cracks you up?

JC: My children and their jokes. Children's humour and how they tell their stories.

And The Castle, it's my favourite movie.

My favourite song is We're Going to Bonny Doon.

QT: Do you have a favourite quote you like to live by?

JC: "You wake up in the morning and you go to bed at night."

I think I made it up myself but that's how life goes and [stuff is] going to happen in between and there'll be good times and bad but every day is going to be another day.

QT: If you could do anything, what would it be?

JC: I'd like to turn my life around. I'm raising a family and I'd like more time to do that because it's so important.

Probably not work as much and help my family more. I've been building for years and I work long hours. Whatever happened to the 40-hour week? Why do we do it? Just to say my car's bigger than yours?