Mayor to get behind CO2 initiative 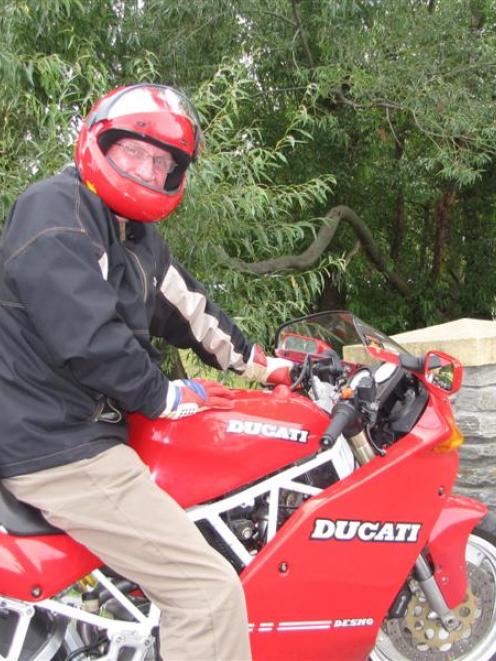 Queenstown Lakes Mayor Clive Geddes on his Ducati motorcycle in Queenstown yesterday. Mr Geddes will be alternating between the Ducati and his push-bike as alternative methods of transport next month, which he officially designated Car Free Month on Monday. Photo by Tracey Roxburgh.
Don't be surprised if you see Queenstown Lakes Mayor Clive Geddes zipping around on his Ducati motorbike or push-bike next month.

Mr Geddes has committed to reducing his carbon footprint by swapping his car for alternative forms of travel for March - which will see him on his push-bike twice a week - and he's asking other residents in the district to "think very seriously" about changing their travel behaviour for at least one day next month.

Individuals, families and businesses were all encouraged to get involved because of the forecast of increased fuel prices and the increasing number of vehicles travelling into the district's main centres.

An incentive to reduce CO2 emissions - "Right Way" - had become "more than a campaign".

"It's about saving money, it's about being healthy and it takes away frustrations like finding or paying for a car park, not just for one day or one month but year-round," Mr Geddes said.

A "quantum shift" in the way people travelled in and between communities in the district was around the corner.

"As a council, we are offering some support and encouragement to start making that change - the benefits speak for themselves."

Travelling the "Right Way" included car pooling, choosing to take the bike or bus, walking or (if you travelled a long distance) taking the car partway and then taking a bus or biking.

"Find a solution that suits you and your family and try it," Mr Geddes said.

In addition to Mr Geddes' commitment, council staff had also stepped up to "walk the talk" with the introduction of a "staff travel plan".

Right Way pledge forms are available from the council's website, offices or library.

By dropping off the form, residents would receive a Right Choice drink bottle and information bag.

Everyone who signs up will have their name or business published in a full-page "roll of honour" in community newspapers in the Wakatipu and Upper Clutha areas.

It was free to sign up and delivering on pledges was up to each individual.

"I encourage everyone to give this a try," Mr Geddes said.