Quake rocks and rumbles across South 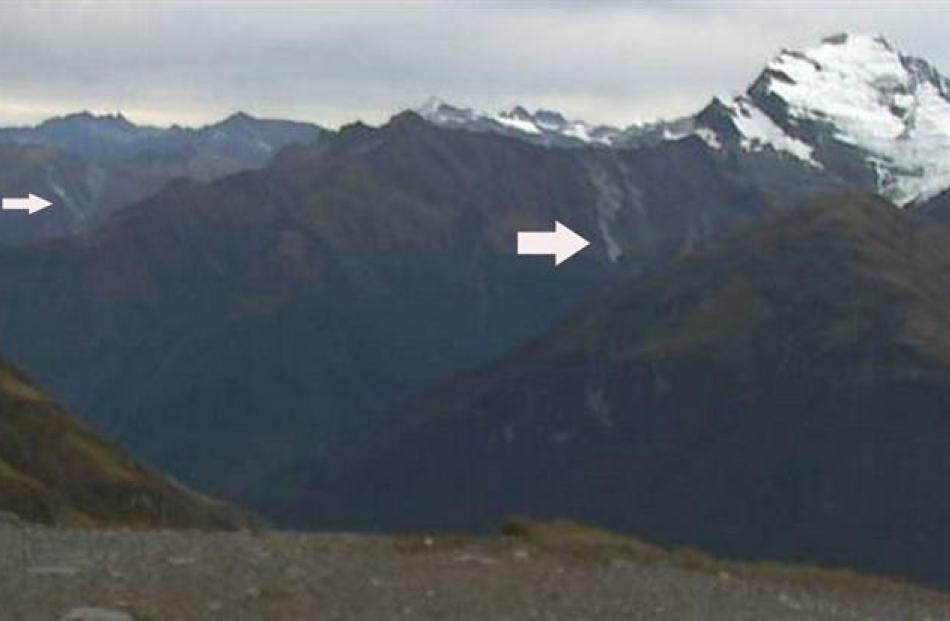 Two rockfalls were caught on the WhareKea Lodge webcam, at Wanaka yesterday, looking towards Mt Earnslaw at the time of the earthquake. Photo from Whare Kea Lodge & Chalet 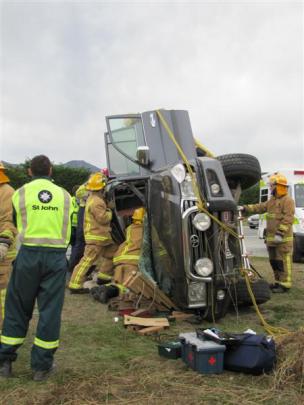 Though the ground was moving, there was no let-up in efforts to free a 73-year-old Picton man whose 4WD overturned about 4km from Wanaka a few minutes before yesterday's earthquake. Photo by Mark Price.

Emergency crews trying to extract a man trapped inside his overturned four-wheel-drive looked up for a second and then got on with the job.

And that pretty much summed up the response in Wanaka yesterday to a magnitude-5.8 earthquake that rumbled its way through the district, setting power lines, buildings and ornaments swaying, but appearing to cause little damage.

The quake was felt across at least half of the South Island.

While the firefighters and St John ambulance staff got back to work in an instant, others in Wanaka spent a little longer in the street, talking over a quake the likes of which has not been felt in the town in recent times.

Some had crawled under desks, some ran outside and others watched with hearts ''fluttering''.

Barista Robert Holt said his customers were ''happy to sit outside and eat and drink alfresco today''.

''She thought it was all part of the experience of being in our bathrooms.

''There's an illusionary painting on the floor [of the bathroom] which looks like it is a crevasse.''

She and other visitors in the illusion rooms and puzzling centre were quickly evacuated by Mr Spear and his wife Heidi Landsborough, the attraction's general manager.

While the earthquake was over relatively quickly, it was ''certainly a good old jolt'', Mr Spear said.

''That was the first serious daytime one I can recall for a while ... it was definitely an upward movement, rather than a side-to-side.''

Wanaka New World owner Dean Bartley was working outside at the time and did not feel the quake.

''I just came in and saw a few shocked people, so started to direct them.''

''Nervous customers'' were told to exit the supermarket's aisles as quickly as they could and leave the building.

The damage to supermarket stock was minor. A small number of items fell from shelves on each aisle, Mr Bartley said.

By the time the Otago Daily Times visited 20 minutes after the quake, plastic bottles of soft drink that had fallen on to the floor had been tidied up, some milk was being mopped up and customers were back shopping.

An email from Mt Aspiring College to parents shortly after the earthquake said the school had been unable to contact a group of children on an outdoor pursuits trip to the Fern Burn, near Glendhu Bay, as there was no cellphone coverage in the area and their emergency satellite phone would only work when switched into ''send mode''.

But college office administrator Mandy Sherson later confirmed to the ODT contact had been made with the group and all its members were safe.

Nick Noble, marketing manager for Treble Cone, said staff up the mountain reported they had felt the earthquake, but there were no obvious signs of damage to the skifield.

Jonelle Cochrane, of West Wanaka Station, near where the earthquake was centred, said the shake was ''definitely the biggest'' she had felt.

''It was pretty scary. It was quite intense ... I think there was one centred there [at the station] not so long ago, but that [yesterday's earthquake] was a goodie.''

She was out in the garden at the time with her 11-year-old son.

Everything around them was ''rattling'' but their house was undamaged.

''It was really noisy ... it sounded like it was echoing around the hills.''

A report the quake broke windows could not be substantiated by the ODT yesterday.

Sub-area commander Senior Sergeant Allan Grindell said the information had not come from Wanaka police and none of three glaziers spoken to by the ODT had received calls.

The manager of Mitre 10 Mark Watson said ''a couple'' of glasses fell off shelves in the homeware section, and customers and staff left the building briefly.

All high shelving was bolted down and designed to withstand earthquakes.

He encouraged Wanaka people to make sure they had emergency kits ''prepared and ready'' and to support friends and relatives, ''especially those who may be frail, elderly or ill''.

On Facebook, Wanaka resident Karen Neilsen said she had ''never felt so terrified in all my life''.

Lake Hawea musician Anna van Riel said the earthquake felt ''like a gigantic lorry was driving through our house''.

A Wanaka person described the quake to GeoNet as being ''like a freight train going by'', a person in Cromwell said their ''whole house creaked'', while another in Invercargill said it caused the building they were in to sway for ''at least 20 seconds''.

Chief executive Adam Feeley said contractors would carry out an aerial inspection this morning and an update on the road's status is expected by 10am.

The Arrowtown Athenaeum Hall would also be closed overnight as a precaution, pending an engineer's inspection tomorrow.

Inspection of other public buildings was continuing.

Visual inspections of critical infrastructure across the district, including water and wastewater systems, had confirmed no damage or interruption to supply.