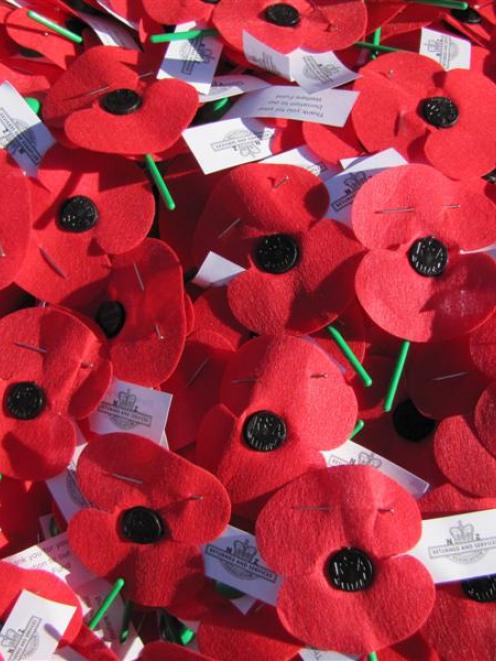 The Christchurch-made poppies on offer in Queenstown. Photo by James Beech.
War veterans and volunteers collecting money in Queenstown for Poppy Day have been verbally abused by people who believe the poppies are made in China.

They had on offer 8000 traditional poppies, which were made by a disabled group associated with the Christchurch RSA and left over from last year's appeal.

The poppies were not made from materials from China and assembled in Australia.

RSA Queenstown president and Vietnam War veteran David Geddes said yesterday RSA members "were surprised at the depth of feeling" about Chinese poppies, which are identical to those made in New Zealand.

"Some collectors were abused ... and we find that quite sad.

"People were saying they shouldn't be touching stuff from China. I find it quite offensive to the Chinese people who live and work here.

"We found it very disappointing because people are losing sight about what the poppy is about - remembrance."

Mr Geddes said he hoped the attitude was not a factor in the Poppy Day appeal, with noticeably less collected so far this year for veterans' and veterans' immediate dependants.

Dunedin RSA president Jenepher Glover said there were no such problems with poppy collection in Dunedin, although some members of the public had commented about poppies being made in China.

She said members of the public generally "had more respect" than to abuse veterans and collectors.

Central Otago RSA members say many many people have been commenting about the "Chinese" poppies.

Alexandra-Clyde RSA member Jock Braidwood said he had heard a "few grumbles" but nothing serious.

However, donations were down on previous years and he attributed it to people possibly thinking the poppies were made in China.

Maniototo RSA secretary Margaret Lockhart said it seemed as though people might be donating less for the poppies this year and thought some were "a bit hot under the collar" and had commented. However, there had been no abuse or complaints about where the poppies were made.

In North Otago, the number of poppies sold is expected to be "slightly down" on previous years, but North Otago RSA president Norman Foley feels donations could be similar. He will not know the total until the end of the week.

Some people who objected to poppies made in China still made a donation, he said.

"North Otago people have always been very supportive of their RSA and while some did ask [about the poppies' origin] and objected, they still made donations."