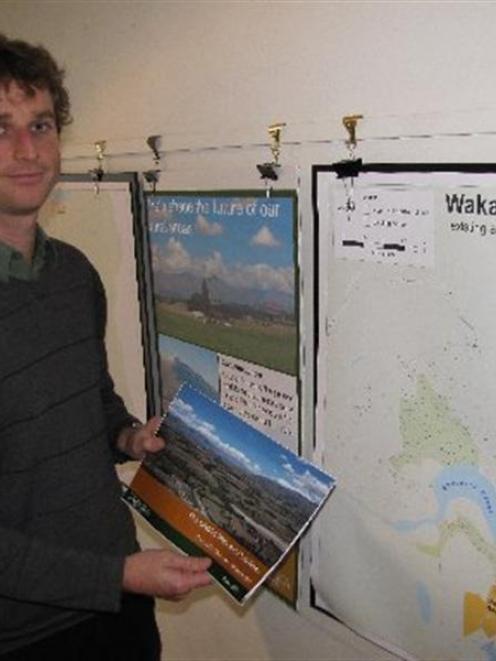 QLDC senior policy analyst Daniel Wells with the district plan and rural areas discussion document. Photo by James Beech.
The Queenstown Lakes District Council is reviewing its rules for living in rural areas. In the first of a three-part series, Marjorie Cook explores the issues.

Rural land: how should it be managed and who cares?

These were fundamental issues that in 2001 toppled a pro-development Queenstown Lakes District Council and ushered in an administration the ratepayers hoped would defend a district plan containing some of the most restrictive planning rules ever seen south of Auckland.

Now, under the Resource Management Act process, the council must review the 1998 document.

Do the issues engender the same feelings?

QLDC senior policy adviser Daniel Wells does not know but says the review could well reignite debate between farmers, developers and environmental advocates, who have an uneasy relationship at the best of times.

The council called for feedback on the review in April and the community has until June 18 to make their views known on the three rural zones: rural general, rural lifestyle and rural residential.

A few submissions have trickled in so far, and Mr Wells expects many more by the cutoff date.

He does not want to restrict debate - "We are open to comment on anything to do with rural planning" - and is keen to clarify the review is separate from urban and Arrowtown boundary changes already in the system.

The review will be a long process and if it triggers rural zone plan changes, formal public submissions may not be sought for another two to three years, Mr Wells said.

So are the rules working to protect the environment and do they still represent community values?

"Some of them [work] better than others. It depends on who you talk to.

"I guess that is what we want to understand, and get a range of views.

"Some people say they work brilliantly. Others don't.

"It is all well and good what we think here in the council, but it is the community's opinion that matters . . .

"We are getting ready for a complete overhaul, although it might not come to that," Mr Wells said.

"It is unlikely the toil of previous years will be tossed aside.

"I'm very reluctant to disregard all that work.

"We may well reach the conclusion they are not a bad balance and let's not change it too much.

"But it could open up all types of discussions about how we manage these areas.

"For example, with Federated Farmers, their frustrations range from getting a consent for an irrigator - something they would rather not have to do - right through to getting more liberal rules controlling housing and subdivision.

"Should the QLDC move at all, a little bit or liberate all these issues?" Mr Wells does not expect to obtain a consensus.

"It is important and more constructive to get involved at an early stage, when we haven't set a preferred direction.

"There is more opportunity to influence the council if you get involved early.

"It is a time when people can put in more creative ideas."

So what happens after June 18?

Mr Wells will write a report for the council, based on the feedback and stating a preferred position.

If councillors decide on change, there will a further, formal round of public submissions and a hearing, possibly followed by an Environment Court appeal.

A vote must also be undertaken for the review to become part of the annual plan.

What's the point?
Points to ponder on rural zones:
- Rural zones are expensive to administer and generate lots of court appeals. Could the rules be clearer?
- The rules protect landscapes. These have been influenced by farming. Will more diverse land use affect visual appeal? Is farming under threat?
- If houses were built on all the building platforms that already have consent, the landscape would look very different. Have we reached a threshold on rural development?
Discussion documents and landscape maps: www.qldc.govt.nz