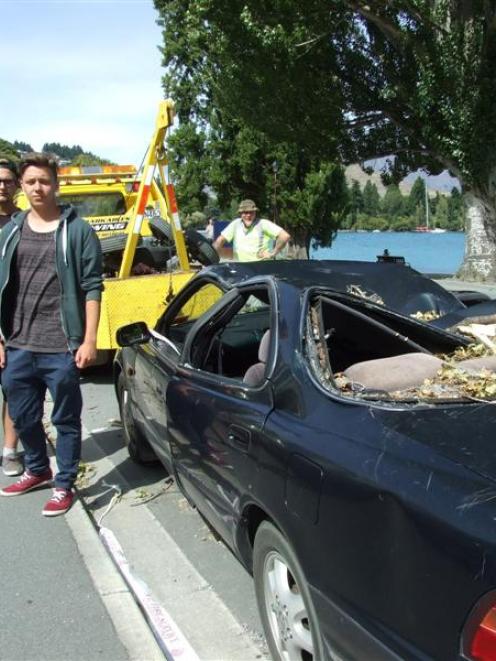 Nico Reiner (left) and Paul Zeller (both 18), from Germany, say they are out of pocket after a tree in a Queenstown Lakes District Council park fell and crushed their car. Photo by Chrstina McDonald.
Two German visitors whose $1400 car was crushed by a tree which had been growing on a Queenstown Lakes District Council park say they have been given $70 for parts, free towing, and a free bungy jump each.

Paul Zeller (18) and fellow traveller Nico Reiner (18) had third party insurance for their 1994 Toyota but it did not cover them for a 120-year-old Lombardy poplar tree falling and writing off their legally parked vehicle just over week ago.

The tree was growing in St Omer Park but Mr Zeller said a representative from the council told him the council had no responsibility and he should claim on his insurance.

The pair said they were $1700 out of pocket after the incident, as their insurance is now worthless and the car had petrol in it.

''You just feel angry but you don't know who you can be angry at,'' Mr Zeller said.

He said the council had paid for towing of the car, organised a free bungy jump and offered $70 for parts of the car which could be salvaged.

A council spokeswoman confirmed the council had organised bungy tickets but would not confirm any other specific details.

The spokeswoman said the council had received a letter from the car's owner and would be ''responding directly to the parties involved''.

Mr Zeller's concerns in the letter included a plea that the ''proper thing to do is for the QLDC to pay me that amount [$1400] and not procrastinate''.

''Clearly the QLDC have a responsibility to maintain reserves and the plants that grow on them, a simple 'it's not our problem' is both incorrect and somewhat arrogant,'' the letter says.

After staying an extra week in the resort to sort out the car, the pair were due to leave Queenstown at the weekend - after taking up the offer of free bungy jumps.

No-one was harmed when the tree fell but it also damaged another six parked cars, a section of the Lakeside Motel's roof and balcony, and stopped traffic for more than two hours.

Mr Zeller said for two young travellers every cent was watched and the loss of the car, which they had bought two and a-half weeks before the tree incident, meant they would now have to find employment again.

They finished work in Blenheim and had intended to travel for the remainder of their time in New Zealand.

An arborist has determined the fallen tree was affected by white rot and has been assessing the remaining 22 poplar trees.

He is expected to present his results to the council in a report this week.