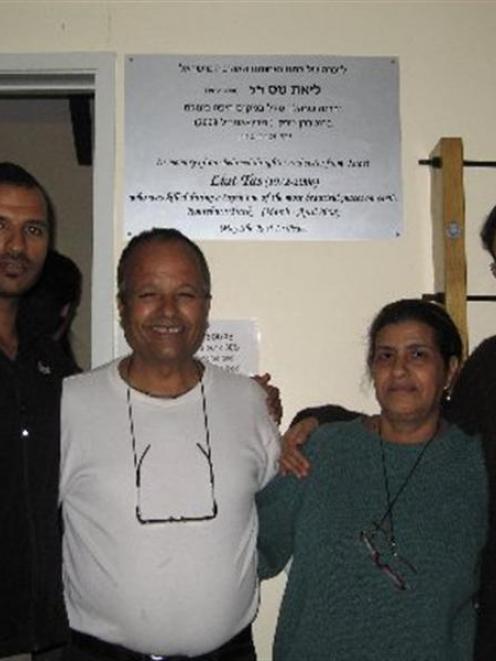 Liat Okin's family, from left, brother Itamar Tas, father Shalom Tas, mother Miriam Tas and sister Shira Revivo at the Doc Mackenzie Hut where Ms Okin was last seen on the Routeburn Track. Photo supplied.
The family of Israeli tourist Liat Okin, who died on the Routeburn Track more than a year ago, has returned home after an emotional visit to Fiordland to see for themselves the place where she perished.

Heartbroken parents Miriam and Shalom Tas plus their daughter Shira Revivo flew out of Queenstown on Saturday after walking part of the track and holding a memorial service at Mackenzie Hut over the Easter weekend.

They also installed a memorial plaque for their daughter at the hut.

"But they went home with a warm place in their hearts forever for New Zealand.

They have had so much support and met so many nice people here."

Mr Tas said his family had been given permission by the Department of Conservation to be dropped by helicopter at Ocean Peak Corner, having first flown over the area where Liat had gone missing, and then walked back to Mackenzie Hut with Doc staff and Queenstown police officer Sergeant Steve Hutt.

The next day, after the memorial service and plaque dedication, the family walked to the Divide, tracing Liat's steps but in the opposite direction.

It had been a "very emotional time" for the family, Mr Tas said, but had provided some closure for his parents.

"They couldn't imagine it [the area] from the stories so it was very good to see it for themselves. They are very happy with their decision to come all the way out here."

Sgt Hutt said Mackenzie Hut, which holds about 50 people, had been close to full during the Easter holidays and many of those present had taken part in the memorial service.

"Everyone was very respectful," he said.

Ms Okin (35) was last seen alive on March 26 last year at the Mackenzie Hut but police were not advised she had gone missing until April 7.

An intensive search failed to find any trace or the missing woman and was suspended on April 22.

Her family then mounted a private search, estimated to have cost more than $100,000, which ended when her body was found near Roaring Creek on May 16.

Southern region coroner David Crerar will hold an inquest in Queenstown on April 29.

Mr Tas, who has stayed behind in Central Otago for a few days, said none of Ms Okin's family would be attending the inquest, but they had arranged to be kept informed of the proceedings.