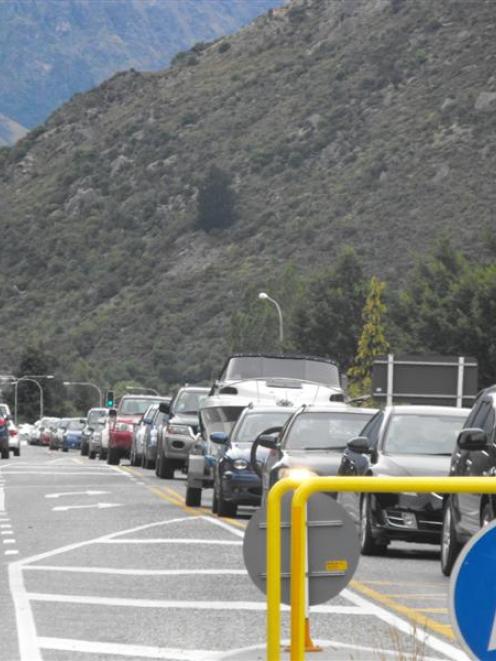 Traffic moves slowly through Frankton as congestion causes delays on the single-lane Kawarau Bridge yesterday afternoon. Photo by Olivia Caldwell.
The New Zealand Transport Agency (NZTA) is considering whether to manually control traffic on the Kawarau Bridge as hundreds more vehicles are expected in and out of Queenstown around New Year's Eve.

Yesterday up to 300 vehicles at a time were queued on either side of the single-lane bridge, some stopped as far back as the Remarkables skifield turn-off.

It would be the first time such measures had been required on the bridge for New Year's Eve traffic congestion, he said.

Yesterday the NZTA put electronic signs at either end of the bridge, telling motorists to keep vehicles close so bridge sensors that control stop-and-go lights would be triggered.

Some motorists had been leaving large gaps between vehicles in front while waiting, so sensors were not being triggered.

''We are also looking at installing some more sophisticated detection equipment at the bridge, to cater for the peak traffic times in winter and around the new year. But that will require some investment and further consideration,'' Mr Jarvis said.

Congestion at the bridge caused delays of about 30 minutes all day and into the evening.

Traffic was headed both ways, although more was Queenstown-bound for New Year's Eve.

She urged motorists to stay calm.

Sgt Pirovano said there had been no major traffic incidents in the past couple of days, but five cars collided in a minor ''nose-to-tail'' incident in the Gibbston valley yesterday.

She said the regular occurrence of tourists crossing road centre lines was an issue which caused more risk at this time of year.