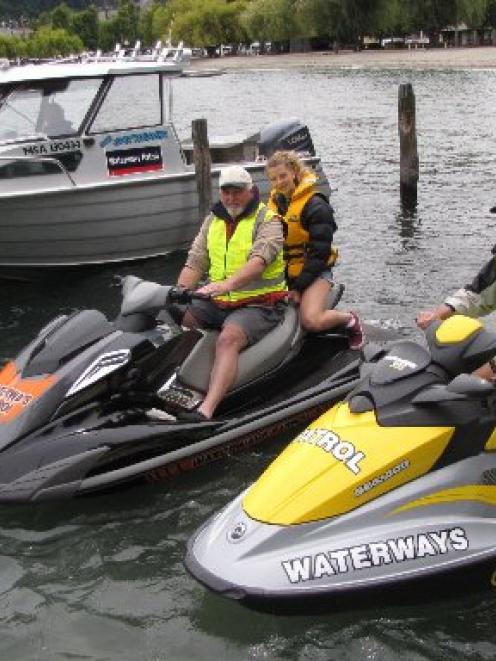 Queenstown Lakes harbourmaster Marty Black (left) with Jessica Forrest (16), of Invercargill and water patroller Louie Adamson (right) on Lake Wakatipu yesterday. Patrollers will be out in force this summer, issuing instant fines to anyone not wearing a life jacket in a boat of less than 6m. Photo by Tracey Roxburgh.
Patrols will be out in force in Queenstown and Wanaka during the busy summer period, ensuring recreational lake users are adhering to the rules.

Harbourmaster Marty Black said two jet skis would be based in Wanaka, along with a motorbike and a jet ski at Glendhu Bay and two jet skis and a waterways patrol boat on Lake Wakatipu, enforcing the Queenstown Lakes District Council bylaw that requires anyone in a boat less than 6m in length to wear a life jacket at all times.

It was imperative children wore life jackets that fitted them properly to avoid tragedies.

''You can't put a small child in an adult's life jacket - they will just slip straight out, and we've seen some recent tragedies in other parts of the country where that has happened,'' Mr Black said.

Further, anyone borrowing kayaks and dinghies from friends or using gear loaned by their accommodation providers should remember to collect life jackets along with the paddles and oars.

Mr Black urged parents to be particularly vigilant if small children were playing by rivers.

''My goal is that everyone has a fantastic time in and around the water this summer, and the best way to make that happen is to use common sense, keep an eye on your kids, and always wear life jackets when you're out on the water.''

Anyone caught breaching the bylaw would be issued with instant fines.

Last month, Mr Black dealt with two kayakers in separate incidents on Lake Wakatipu, neither of whom were wearing life jackets.

Just five days later, four people on the Clutha River in inflatable dinghies were pulled off the water after being spotted by an Albert Town resident.

The three women and a man were summonsed off the river. None had a life jacket on and all said they were unaware that they should have worn life jackets.

Mr Black also encouraged people to check conditions before launching into rivers in the area, with logs and other debris washing downstream following heavy rain.

Last weekend, a group of kayakers had a ''near miss'' on the Hawea River where an eroding stretch of bank ''effectively left a tree strainer in mid-stream'', about 4km downstream of the Camphill Road bridge.

Contact Energy reduced the river flow to about 10 cumecs and removed two trees from the river, also underwriting the cost of the operation.

Mr Black said although that stretch of river no longer contained a hazard to kayakers and other river users, everyone using rivers in the Queenstown Lakes District should be mindful of the risk posed by submerged or partly submerged obstacles, including trees.

In the Shotover River, a large willow tree about 500m downstream of Tucker Beach was also a potential trap for anyone floating in a tube or raft, he said.

''Even if you're using a stretch of river that you're familiar with, please keep a good look out for trees, logs and other debris,'' Mr Black said.

''Rivers are very dynamic and can change from day to day as the level rises and falls,'' he said.