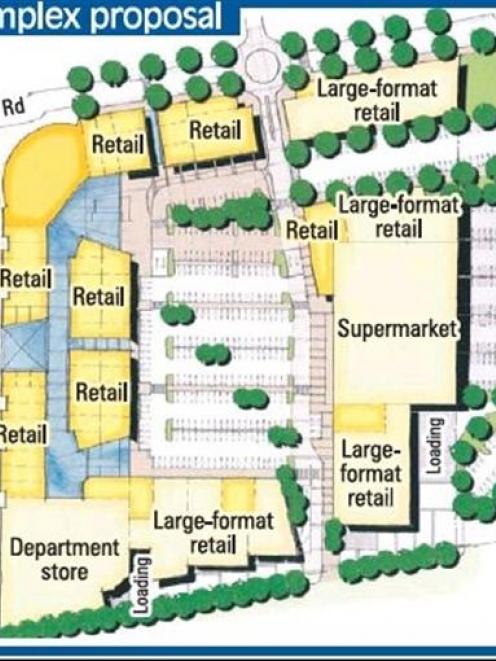 The deal between Auckland-based complex developer Tony Gapes, the Queenstown Lakes District Council and Lakes Leisure to build an amenity-free shelter on the border between the complex and adjacent sports fields was a "kind" offer that could reap benefits for the community, he said.

The shelter was a landscaping measure aimed at minimising the aesthetic effects on the neighbouring sportsfields, with the possibility the shelter could eventually become a proper sports facility with changing sheds and showers.

There was a "clear separation" between Lakes Environmental and the council over the issue of resource consents, he said.

News of the proposed development would come as relief to Queenstown residents after a consent application for stage one of the project was lodged with Lakes Environmental this week.

"I think the community has been really concerned - and a little bit embarrassed - and I think everyone will be very, very happy to see it all tidied up with a development that is allowed by the zoning to go up on that site," Mr Geddes said.

Project planning consultant John Edmonds said Mr Gapes wanted to start the project "as soon as possible". He confirmed a bulk retail precinct was planned, featuring up to seven large outlets including sports, furniture and homeware stores, with a further glass-enclosed sector of 40 to 50 mainly fashion and food stores planned in a mall based around a two-level department store.

Predominantly single-storeyed, with some two- and three-storey levels, the complex will feature precincts around a large central car park and will include an entertainment junction of bars, restaurants and cinema complex.

Auckland-based Mr Gapes bought the 7.7ha stage one of the former Five Mile site from receivers for $12 million in November 2009, and lodged his application with Lakes Environmental this week for the master plan of stage one of the Grant Rd project.

Mr Gapes told Colliers International the new Five Mile project would create a tourist hub and be a boon for Queenstown contractors and consultants.

Pointing to a forecast 9.5% increase in visitors to Queenstown by 2015, he said the complex had attracted expressions of interest from retailers - primarily Australian chains - which do not already have a foothold in the resort. The entertainment zone will feature restaurants, bars, movie theatres and may include a bowling alley.

It is envisaged the development could also draw local people with a weekend Farmers Market feeding off the neighbouring Events Centre, Alpine Aqualand pool and sports fields, the Mountain Scene newspaper reported yesterday.

Mr Gapes paid $48 million for the 31ha Five Mile site in a receivership deal that also includes the locally-named "Hendo's Hole", a giant excavation that was to become a 1200-space underground car park before Mr Henderson's Five Mile Holdings went into receivership in 2008.

Mr Gapes could not be contacted last night.