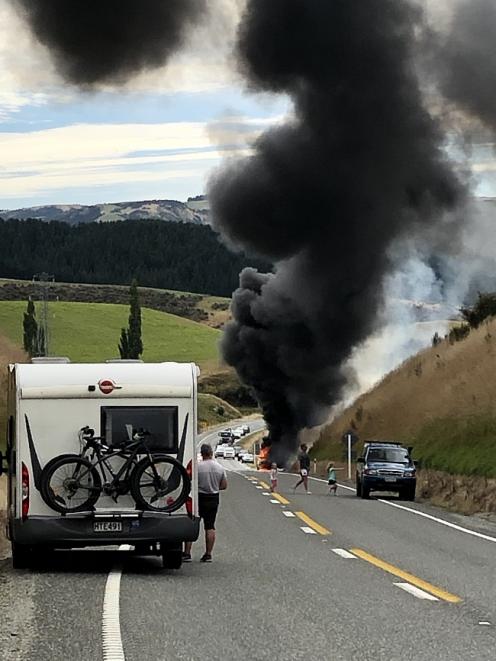 She and her children Jemima, 12, and Arthur, 10, were about halfway to Dunedin last Saturday when a couple in an oncoming car flashed their lights as she drove up a hill.

Thinking they were alerting her to a cop, she slowed down.

"In the rear mirror I could see smoke coming out the back.

"As I was slowing down, the dash lights started to flash and my steering wheel locked up."

When a woman from the oncoming car ran over, she thought she said 'tyre'.

"I still only thought I'd had a blowout in my tyre, so I opened the door and told the kids to stay in the car.

"I went to the back and realised my tyres were fine.

"Next thing I realised the person yelling at me was saying 'fire', not 'tyre'.

"The kids had got out by this stage, and I turned around and the bonnet basically blew – that's when I saw flames.

"No one says that cars explode, but it just literally kept exploding."

She learnt from the woman's husband that they'd seen the fire start under her 4WD.

As she watched, the fire also set alight a grass bank – "I thought, oh my God, I'm going to set the farm on fire".

Having left behind her phone, wallet, computers and bags, she'd held hopes something could be salvaged, but her car was reduced to a steel shell – all she later recognised was a steel drink bottle.

Lund feels they were lucky to escape unharmed, thanks to the couple in the oncoming car. She's also thanking the Millers Flat fireys – "they're game as Ned Kelly" – and the Lawrence cop who took them on to Dunedin.

"Having been in the police, I do think I'm a pretty tough cookie, but when you're in it yourself, with your children, it definitely makes you feel very vulnerable."

They'd been going to a Six60 concert but only lasted an hour.

"I think the shock hit the kids – Arthur was having a bit of a meltdown 'cos he lost his bear bear he's had since he was born."

Lund, who was fully insured, doesn't yet know what caused the fire – oddly, the car had been serviced, and a new brake pad fitted, only three days earlier.