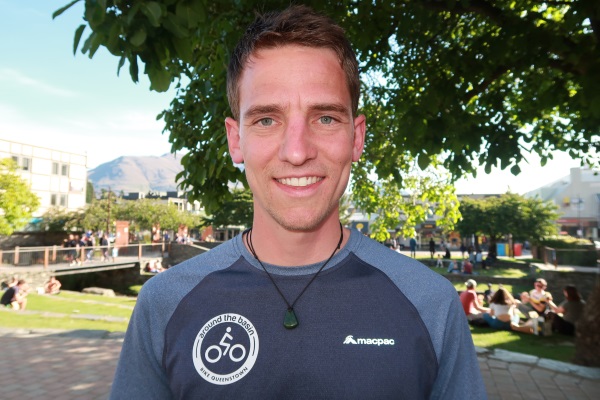 After a huge amount of logistical prep, Dinnick, whose first name is pronounced ‘Howell’, became the first known person to run the 60km Kepler, 53.5km Milford and 32km Routeburn in one day.

The Welshman chose the occasion of his 30th birthday, December 23, to accomplish the feat, starting on the Kepler at midnight and finishing the Routeburn at 11.20pm.

He was initially inspired by Wanaka’s Mal Law, after reading his book on his successful 7 in 7 Challenge in 2009, when he ran seven Great Walks in consecutive days.

Dinnick then, with help from Queenstown runner James Harcombe, cracked the Kepler and the Routeburn in one day a few years back.

“James said, ‘how hard would it be to sandwich the Milford in between?’, so it’s been a bit of a goal.”

Since he ran 20 miles – or 32km – the day he turned 20, Dinnick’s also been up for running challenges to mark his birthdays.

He says you might think running’s an individual sport, but he relied on massive teamwork for his mission last month.

His partner, Laura Wallis, organised the teams who handled his transitions – between the Kepler and Milford, it was by car and boat, taking about an hour and a-half, then between the Milford and Routeburn he spent about an hour on a boat, then a car.

He also had company on the tracks – with Scott Underhay and Dwight Grieve, on the Kepler, Adam ‘Mullet Man’ Keen on the Milford and Alex Martin and Harcombe on the Routeburn.

Dinnick was also blessed with good weather and, because of the time of year, maximum daylight hours – though in pitch black, three hours in on the Kepler, he was thrilled to see a kiwi.

He says he was initially a bit anxious about finishing the Routeburn before midnight – on the other hand, he knew it backwards, having run it 40 to 50 times including two wins, one of them a record, in the Routeburn Classic.

“It was definitely the most difficult thing I’ve ever done, but it couldn’t have gone any better.”

Dinnick had about 10 people greeting him at the finish.

But, having already skipped a night’s sleep, he couldn’t stay awake to party.

Harcombe says it’ll take a lot for anyone to break his record “he’s a great example of how you can set a goal, work towards it and pull it off”.