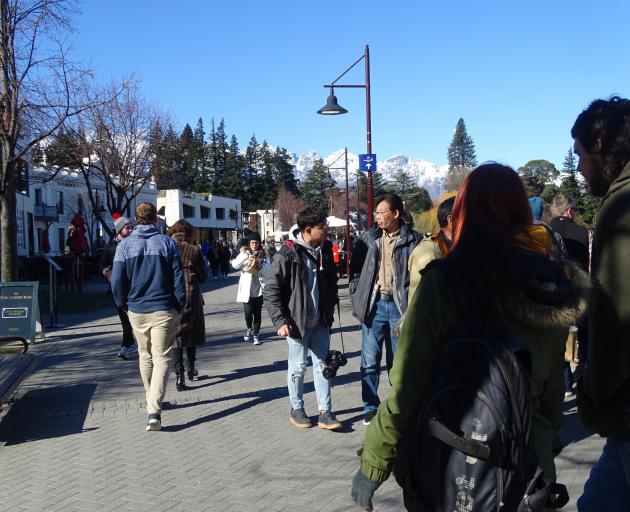 People walk along Queenstown's lakefront streets. PHOTO: TRACEY ROXBURGH
Australians are arriving in Queenstown in their droves and, despite the ongoing staffing pressures, the tourism industry’s recovery is under way.

Destination Queenstown’s most recent forward outlook, based on commercial accommodation bookings, shows Queenstown is on track to experience the busiest July since 2019.

Published on Friday as the Australian school holidays began, it shows occupancy is hovering around 80% of available capacity over the next fortnight, and dipping slightly for the remainder of the month.

Novotel Queenstown general manager Jim Moore said they were selling close to 90% of their rooms, and bookings right through July were strong.

However, sickness, including the flu and Covid, was making day-to-day operations difficult.

"Last weekend we were fully staffed and had five housekeepers call in sick ... I got out of my ski gear, came down and made beds for the rest of the day.

"It puts pressure on everybody else and on the rest of the team, which is pretty hard, but we’ll get through," he said.

He said the group was "very thankful" to the local residents who had kept the businesses ticking over for the past couple of years, meaning they were well staffed, however they too were managing staff illness.

"We’re not 100% back up in terms of having the full level of staff, but we’re pretty proud of how we’ve managed [it]."

Winnies was now back to a seven-day-a-week operation — at some points over the past two years it had only been open four nights a week, he said.

"We’ve had some pretty massive queues for Winnies at the weekends, which we’re loving.

"It’s just great to have that buzz."

Coronet Peak ski area manager Nigel Kerr and The Remarkables ski area manager Ross Lawrence said they were bracing for an even greater influx as more Australian states started their school holidays, and New Zealand followed suit from next weekend.

NZSki will hold a recruitment drive in the Shotover St Snow Centre from 4pm until about 6pm tomorrow to try to bolster staff numbers.

"With sickness and isolation [requirements], we’re on the knife-edge."

Mr Lawrence said they were also still waiting to take delivery of some of their new rental equipment, which was leading to dissatisfaction for customers.

"Some people are getting frustrated that they can’t get on the bus quick enough [and] when they get here, the gear’s gone, and that’s not the sort of experience we want people to have at all.

Mr Impey said understanding was key for visitors to the resort at present.

"I have heard it’s tricky around town in terms of waits, and staff scrambling ... overall, people do need to be patient ... everyone here’s trying to do their best to provide a high-quality experience."