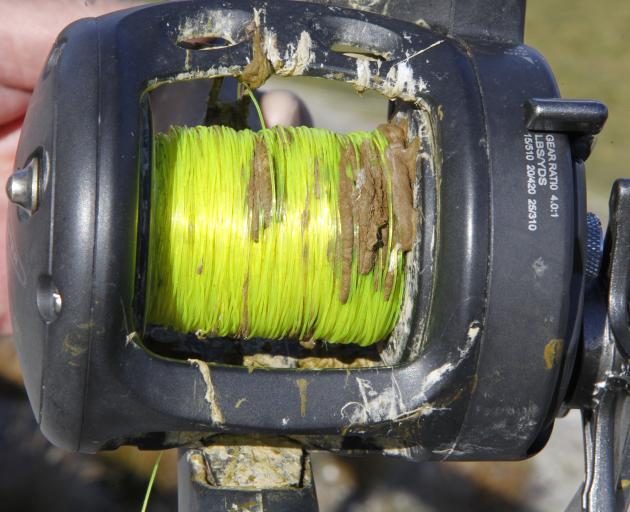 Lake Wakatipu fishing guide Stu Dever's reel in August. Photo from Fish & Game New Zealand.
Funding for research, rather than the series of rejected applications in the past two years, might actually help with the lake snow problem, says a leading scientist on the matter following a lake snow summit in Dunedin.

About 20 freshwater scientists and managers met at the Otago Regional Council offices on Tuesday to discuss the lake weed that is now clogging water filters and fishing gear in Lakes Wanaka, Wakatipu and Hawea.

University of Otago freshwater scientist Marc Schallenberg told Mountain Scene one research idea put forward on Tuesday was to study where the weed occurred in Lake Wanaka and, if the money could stretch, Lake Wakatipu.

''We decided that a really good way to try and begin to understand drivers of lake snow would be to actually study its distribution in the lake, both horizontally - in which bays it is versus the open lake - and also vertically in the water column.''

Information on variables such as nutrient concentrations, temperature and zooplankton density would be collected to help understand it.

Bodies represented at this week's meeting included the Universities of Otago and Waikato, regional councils from Otago, Canterbury and Southland, the Cawthron Institute, Landcare Research, Niwa and the Ministry for Primary Industries.

Such research has been suggested, and rejected, previously.

In 2012, the Queenstown-Lakes District Council rejected Dr Schallenberg's request for $46,000 to cover a one-year study into Wanaka's lake snow problem.

''If that study had been funded, we would know a lot more about the drivers of lake snow today.''

Concerned scientists have experienced a series of funding setbacks over lake snow, including applications to the Otago Regional Council and Marsden Fund.

However, that council is also under pressure from within to change tack.

Regional council chairman Stephen Woodhead said it was taking lake snow seriously and the inland lakes were in excellent health.

He defended the council's response to lake snow, despite the problem being present in Lake Wanaka for years and spreading to Lakes Wakatipu and Hawea this year.

In a statement, he said the ORC's response was ''at present, the best available''.

By phone on Tuesday, Mr Woodhead said the council was taking the issue more seriously following its spread.

He confirmed he had not raised the issue of lake snow with Environment Minister Nick Smith.

The regional council has paid for lake snow-related science in the past.

In 2010, it provided a PhD scholarship ($150,000 over three years) to study the effect of land development on Lake Wanaka's health. And in September this year, it signed a $30,000 contract with Landcare Research to study the genetics of the alga that produces lake snow.

In September, at least 12 years after lake snow was first discovered by fishermen in Lake Wanaka, the ORC collected its first lake snow sample.

Dr Schallenberg said scientists at the meeting did not know how to rid the lakes of the invasive slime and were split on how to stop or slow its spread to other lakes - or even if that was possible.

The meeting seemed positive, he said, adding that it was very hard to judge, as ''words are not action''.