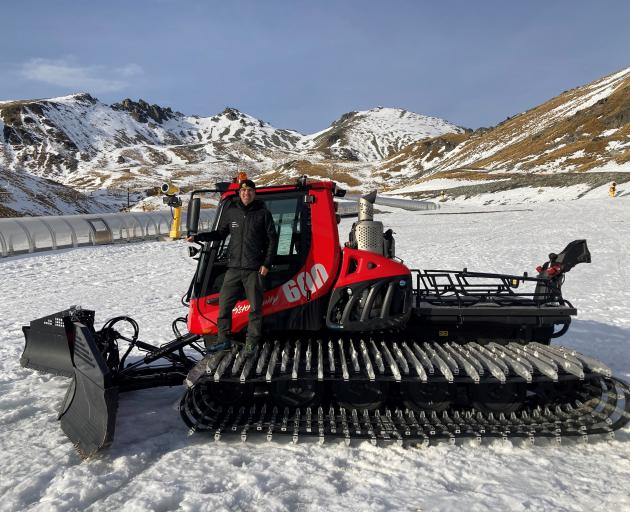 Unlike Wayfare New Zealand, which has been allowed to bring in three international groomer operators and 14 ski and snowboard instructors for Cardrona Alpine Resort and Treble Cone, NZ Ski is yet to be granted any visas.

General manager Paul Anderson said it was now a race against time, with four experienced groomer operators still needed in Queenstown - although he confirmed the company would still open both mountains on time, seven days a week, in some form.

"We are working on two applications at the moment ... it’s been a long process but it’s about timing because we really need these people in MIQ now."

Without a full staff, limits could be placed on the amount of terrain park and number of groomed runs open to the public, especially after snow dumps.

Mr Anderson said he was trying to convince the Government of the benefits of bringing in specialist workers, citing job creation, safety and provision of top-quality facilities for Olympian Alice Robertson, who trains at Coronet Peak.

The Ministry of Business, Innovation and Employment was asked for comment, but could not respond in time yesterday.

Mr Anderson said hiring New Zealand workers was the priority, pointing out the expense of putting foreign workers through quarantine, but said there was a national shortage of groomer operators with the right skills.

NZ Ski had hired 10 junior operators to be trained across its three sites - including Mt Hutt in Canterbury - but Mr Anderson said even the training could be hampered by the shortage of experienced hands.

Coronet Peak and The Remarkables head of slopes Blair O’Donnell said the groomer operators worked in extreme conditions, often overnight, to ensure the mountains were safe for users.

"They play a critical role in storms or avalanche work when traditional snow-clearing equipment is not suitable or transport over snow is required."

Learning how to shape terrain parks could take four or more years in the role, he added

They were required to have snowcat skills, experience with terrain cambers, and expert knowledge of snow sintering.

Coronet Peak is set to open on June 19 and The Remarkables a week later on June 26.