Petition from objectors to airport plans is presented 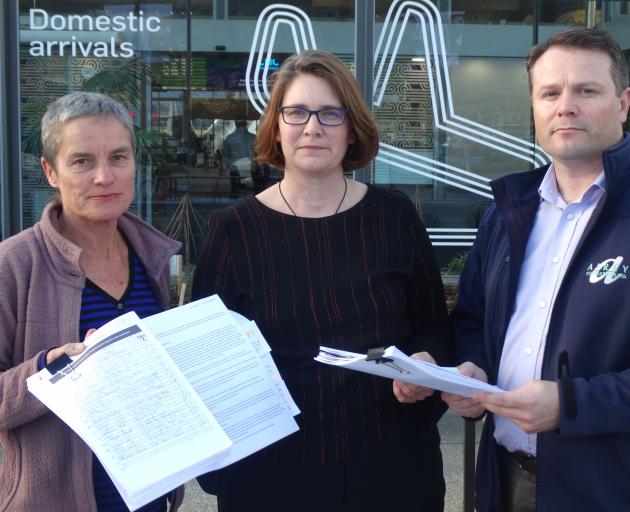 Community association representatives Cath Gilmour (left) and Glyn Lewers hand over a petition to Queenstown Airport property and planning manager Rachel Tregidga at the airport on Tuesday. Photo: Joshua Walton
Queenstown Airport Corporation (QAC) has come under pressure over its proposals to significantly extend its aircraft noise boundaries, after receiving a petition signed by almost 1500 objectors.

The groups' main concerns included ''excessive noise'' the changes would bring and an ''alarming increase in tourism'', which it argued would lead to the community resenting tourists.

FCA chairman Glyn Lewers said there would be a ''negative backlash'' if the right infrastructure was not in place to support the airport's expansion.

''Obviously the noise is an issue but it's not just that, it is the bigger issue of the growth of the community and the pace of the growth and what the Queenstown district wants to see happen into the future.

'''It depends if the town can actually handle it, and at this stage, the feedback we're certainly getting is no, it can't.''

KPCA committee member and former Queenstown councillor Cath Gilmour said it was ''very much just the start of the conversation'' about the airport's plans.

''We did it the old-fashioned way, through the community association and walking the streets and going to clubs.''

The groups suggested strategic decisions should be made by the community and council rather than QAC and the airport should delay its proposed changes to Queenstown Lakes District Council's district plan, until both the Wanaka Airport Masterplan and Queenstown 2050 vision were developed further.

Both associations also made submissions to the airport's public consultation on the noise boundaries plan before Monday's deadline, showing overwhelming opposition from residents surveyed by the groups.

The petition was launched after both groups held separate public meetings last week.

An extra 3000 homes would be located within the proposed noise boundaries, which would be extended to cover residential areas in Frankton Rd, Kelvin Heights and Lake Hayes Estate.

The airport wants to almost double the number of annual aircraft movements the present boundaries allow and more than double annual passenger movements, by 2045.

The airport will now consider the residents' petition and has started reviewing consultation submissions.