A young Filipino mother is in shock after a fire ripped through her family’s home in Queenstown, destroying all their belongings.

She believes a malfunctioning oven - which she complained about many times - caused the blaze.

"In a way, they’re just material things ... [Our possessions] are all gone," she said.

A Fire and Emergency New Zealand (Fenz) spokeswoman said the investigation concluded on Friday December 31 and confirmed the blaze began in the oven.

The fire broke out Thursday afternoon in a unit block in Ballarat St.

A Fenz spokeswoman said the service received multiple calls about 12.20pm alerting it to the fire. 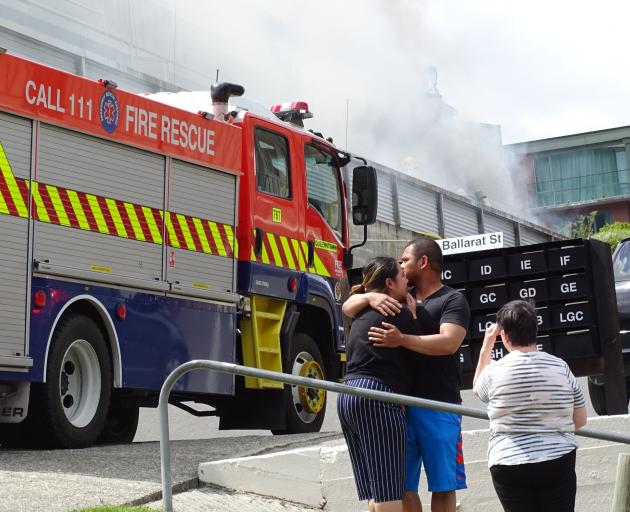 Nikki Gabriel and Rodel Musni embrace as their unit burns in the background. PHOTO: CASS MARRETT
Three crews from Queenstown and one from Frankton were dispatched.

The fire was "well involved" upon arrival, but all inhabitants got out of the house.

The mother, Nikki Gabriel, and her partner, Rodel Musni, lived at the rental property with their 1-year-old child.

Ms Gabriel said that she had complained to her property manager several times about the oven — from which she suspected the fire started.

"It gets hot easily. Even if it’s on low temperature, it’s really hot and even if I turned it off for 30 minutes, it’s still hot. It’s unusual and scary."

The property manager sent someone to fix the oven, Ms Gabriel said.

She had asked for it to be replaced because it was old.

"Just today, I used the oven - I usually just use the stove, so I didn’t really notice if it’s really fixed or what."

The Otago Daily Times contacted the property manager for comment, but they were unable to respond by deadline. 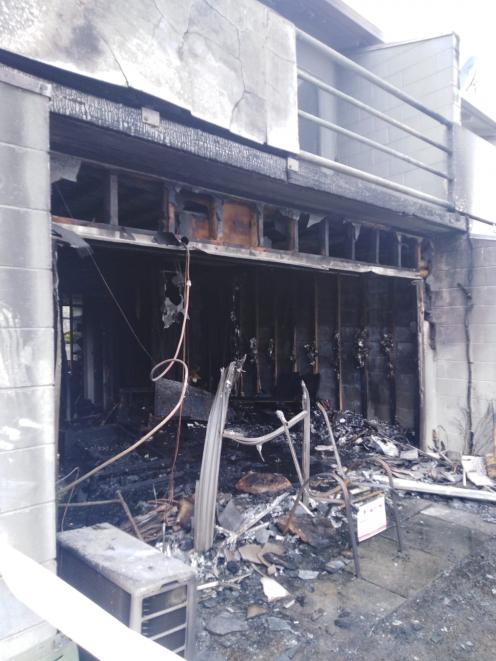 The couple have organised temporary accommodation while they get back on their feet. Friends and family have been rallying to find clothes and care packages for the couple and their child.

A neighbour, who did not want to be named, told the Otago Daily Times he heard a smoke alarm sounding about 12.30pm, just before Mr Musni knocked on his door to tell him about the fire, and that he needed to evacuate.

Once outside, the neighbour called emergency services.

Within a minute, "everything just blew up", the neighbour said.

The windows soon burst out, causing the lawn to catch fire.

"The cars were even getting hot outside — that’s how hot this was."

Mr Musni had the presence of mind to check on other occupants in the block, the neighbour said.

"Even though the wife got the baby out, he went to try and make sure everyone was out of the building.

"Within a minute, the smoke or the fire went through the oven up into the ceiling and then within a couple of minutes, it just blew the whole front of the place out. The lawn was on fire."

A Fenz spokeswoman confirmed crews left the scene about 2.50pm and a fire investigator arrived at 4.20pm.

The fire investigator was still on the scene about 5.45pm yesterday.

A police spokesman said the family was referred to Victim Support and a scene guard remained at the property.

• A neighbour has set up a Givealittle page in order to support the family.