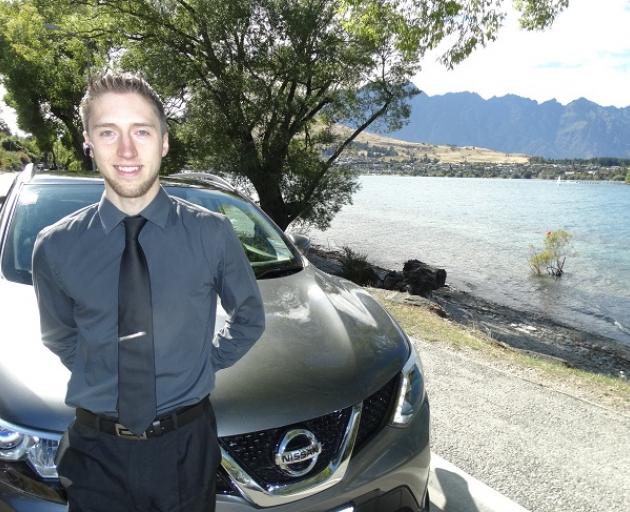 Queenstown taxi driver Luis Kreische. Photo: Mountain Scene
A Queentown cabbie under fire for overcharging admits his fare’s a minimum $18 – and suggests rivals are jealous because he wears a suit.

Mountain Scene last week reported fears a few independent cabbies – and Luis Kreische, in particular – are ripping off customers to the detriment of both the industry and the resort’s reputation.

Independent cabbies have sprung up in competition with local cab companies since the industry was deregulated in 2017.

Kreische, whose emailed reply arrived after deadline, says: “I have never refused any jobs, however to ensure I am earning above minimum wage I do have a minimum fare charge of $18, just like any other independent driver out there has a minimum fare, too, even Uber has.

“I wonder what other operators have to say about the prices of Corporate Cabs or Black [ZQN] or Limousine [Services] Queenstown?

“Perhaps they’re just jealous that I wear a suit and provide a superior service and charge more, or perhaps they are jealous because they are stuck under a dysfunctional taxi company and are not allowed to increase their prices by five to 10 per cent each year, just like most other businesses do.”

In response to Destination Queenstown CEO Graham Budd’s concern over overcharging hurting the resort’s tourist reputation, Kreische queries whether he’s concerned about the proposed visitor levy, or how much other businesses, from bars to accommodation, charge visitors.

To try to tidy up the situation, Queenstown council’s introduced a permit system for its ranks which takes effect from the end of next month.

Kreische says he’s not purchased a permit “as I do not intend to do this job for very long”.

He predicts there’ll be more and more independent cabbies as big companies fragment because their drivers “will be stuck and working on their low rates mostly”.

Grant Scannell, boss of the resort’s largest cab company, Queenstown Taxis, says it’s Kreische’s business what he charges, but “it’s not a good look for our industry”.

NZ Transport Agency NZTA’s South Island road compliance manager Kelvin Lloyd says drivers “must agree with the prospective hirer the scale or basis of the fare prior to the start of the trip”.

He says the agency’s only received one complaint against a Queenstown cabbie overcharging since the industry was deregulated in 2017. That was to the airport earlier this month and is still under investigation.

Scannell says: “All of our guys wear a full uniform, whether it’s a suit or not.

“We haven’t increased our prices since 2001, and we’re not a dysfunctional taxi company.

“We provide a service at an affordable rate for our customers, our drivers are able to make good money, and saying they’re on a minimum wage is untrue and unfounded.”

He says his company has 54 shareholder operators and another 13 contract drivers who own their vehicles but don’t own shares, “and then we have employees that are not paid less than the minimum wage”.