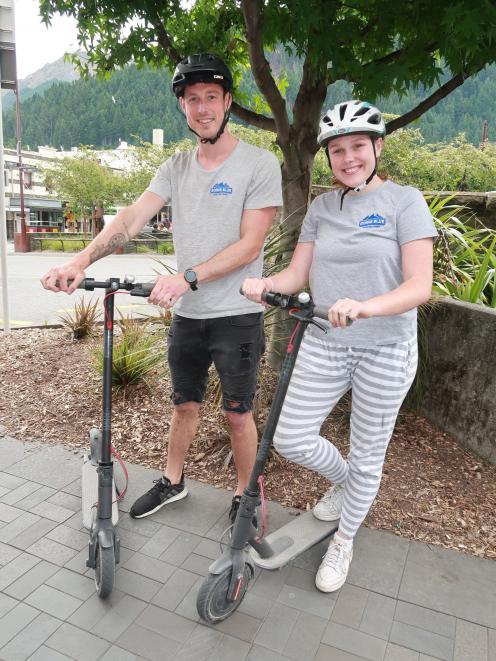 Going Blue operations manager Jay Laine and staff member Bella Jolly provide all their e-scooter customers with helmets. Photo: Philip Chandler
While no date has been set for a six-month trial of Lime electric scooters in Queenstown, two other operators are up and running.

New bike hire company Going Blue has seven e-scooters in the resort, which it hires out for half or full days.

Operations manager Jay Laine said it provided helmets to all its customers, even though they were not required by transport regulations, and conducted safety briefings.

It also checked the scooters after every use and had a restricted-speed option where they could be slowed to a maximum of about 15kmh for children or elderly clients.

The Queenstown Lakes District Council entered a memorandum of understanding with Lime late last year, agreeing to a six-month trial in the resort, expected to begin in April.

During that time, about 400 scooters will be operating.

Under the agreement, Lime must have its scooters off the streets by 10pm. Mr Laine said Going Blue’s were removed by 6pm or 7pm.

Lime, in its agreement with the council, also committed to educating riders on safety and providing regular safety checks.

E-Scoot, which started in Queenstown in 2018, after being pushed out of Dunedin by Lime, operates 20 e-scooters in the resort.

A spokesman said riders all wore helmets and basic training was provided.