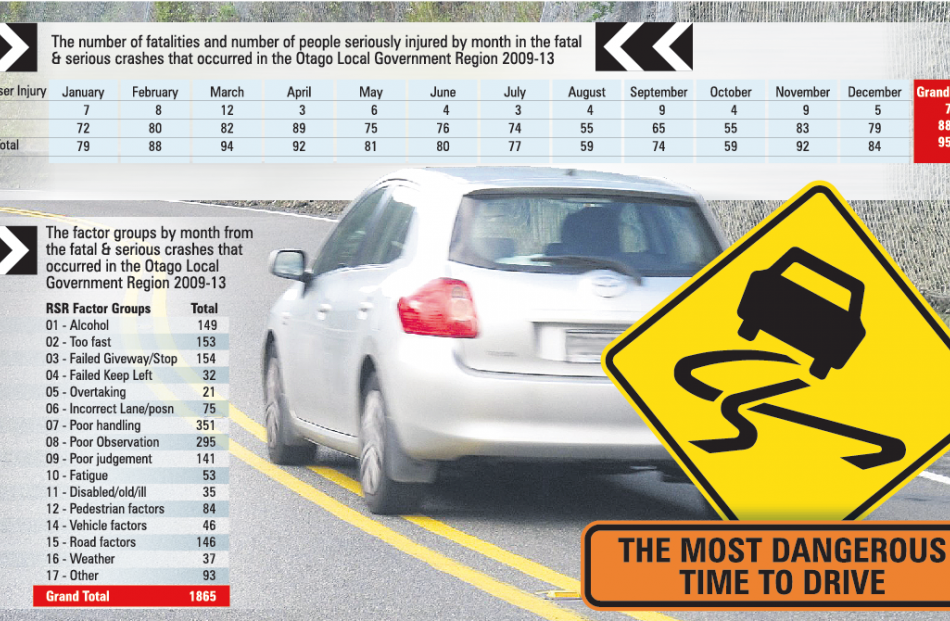 The New Zealand Transport Agency recently released data to the Otago Daily Times detailing factors contributing to accidents on Otago's state highway network, as well as the months in which accidents occurred. Leith Huffadine took a deeper look into what the numbers mean.

If you drive from Te Anau to Milford Sound, from Mosgiel to Kyeburn, or from Wanaka to Haast during February or November, watch your handling and stay observant.

If you work by the numbers, those roads, during those times of the year, are when a fatal or serious injury accident is most likely to occur because of failures in driver handling or observation, New Zealand Transport Agency (NZTA) data shows.

In contrast, weather was a comparatively minor factor in accidents, contributing to only 37 incidents out of a total of 1865 throughout Otago in the past five years.

However, acting road policing manager Senior Sergeant Steve Larking said while weather did play a part in accidents, there were often many other factors at play that led to crashes.

''Some examples of this are where people may crash on icy or slippery roads, or on a straight piece of road. Many other motorists may have passed by the same piece of road but have not crashed, so something else is contributing to the crash beside the weather conditions, such as speed, poor handling or observation, or the driver's ability.''

Snr Sgt Larking expected high accident numbers in February, March, April and November to be related to the number of people on the road.

In February in particular, there were a large number of holiday makers and tourists in the region, he said.

More people on the roads meant more people at risk to accidents.

During winter, people travelled less, and were also more aware of their circumstances and surroundings, leading to fewer incidents.

''There is the strong possibility it may lead to drivers travelling at lower speeds to keep themselves safe in bad weather such as wind, rain, mist, snow and frost.''

Other high-ranking factors in fatal or serious injury accidents included alcohol, in 149 accidents out of 1865, excess speed in 153, failing to give way or stop in 154, and road factors in 146 crashes.

Snr Sgt Larking said, like weather-related incidents, in any crash a number of factors could be involved.

''There is no doubt that not driving to the conditions, following too closely, speed, fatigue, drink and drugged driving are some of the major factors in why people crash. Using a mobile phone, eating, changing CDs all result at times in distraction and poor observation.''

Minor distractions could, and did, lead to crashes, some of which had lifelong consequences, he said.

Snr Sgt Larking said during the five-year period 2009-13 represented in the data, there had been a reduction in crashes across the Southern police district.

Another project which had been running since 2010 was Safer Journeys, a partnership between NZTA, police, the Accident Compensation Corporation, and different councils, to reduce road deaths and injuries.

Mr Mortimer said the Safer Journeys initiative had noticed a decline in incidents relating to factors such as alcohol, drugs, speed, and age categories.

The two biggest factors in accidents noted by the group were alcohol and speed, he said.

''We are really pleased. Things are going in the right direction but there is still a long way to go. It's not an issue just for us [emergency services and other agencies] but for all road users. We all have a responsibility.''

Snr Sgt Larking repeated the message of driving to the conditions.

''It's a regular comment from police but ... watching your following distances and not taking risks will make the roads safer for everyone.