As government funding for roads comes under review, the burden of cost is increasingly shifting on to local ratepayers. In the South, many districts face a crossroads. To keep the regions moving, do councils raise rates, or let roads fall by the wayside? 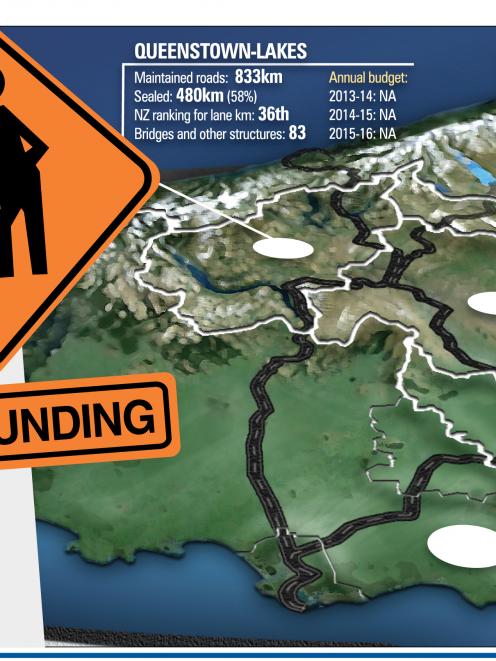 <a href="http://www.odt.co.nz/files/story/2014/06/road_funding_new_3_jpg_53917a61... target="_blank">Click HERE for full-size image</a>
The first review in 30 years of the way roads are paid for could have far-reaching effects on local ratepayers' pockets - and on our highways and byways.

The New Zealand Transport Agency (NZTA) says it is about ensuring ''value for money and fairness to all''.

The agency expects to make final decisions on its review of funding assistance rates (FAR) by the end of this year, with changes implemented from 2015-16.

Even before it is finished, the review is causing consternation among some local authorities.

The changes will determine how much government will pay through the agency and how much local authorities and ratepayers may have to pick up if they want to maintain road standards.

Clutha - with the nation's third-largest local roading network and a small population - could be one of the hardest-hit districts in the country. As the burden shifts, the pressure is likely to hit ratepayers.

Questions also hang over special funding for tourist roads - a big issue, for instance, in the Queenstown-Lakes area.

Southlanders, who have more roading than any other district in the country, have already cut costs about as much as they can. Autumn's flood damage to Waitaki roads will cost $1.8 million to repair. The NZTA will help pay. But how much next time?

And with quiet back roads in Central Otago, Mayor Tony Lepper says ratepayers might have to accept some will not be maintained as they were in the past.

Local authorities have taken issue with some changes, including the degree of assistance which will be received for road maintenance and improvements and for work arising from emergencies such as flooding and snow.

NZTA southern region manager Jim Harland said the agency had consulted stakeholders, including local authorities, since the review started last year, and would do so as it finalised four outstanding issues:

• Determining factors, including the latest Socioeconomic Deprivation Index, which would take into account a council's ability to pay the local share.

One aim was to get all local authorities on the same funding rate for all roading work, set by the agency at 52% with the other 48% ''local share'' coming from ratepayers or other sources.

However, those local authorities judged to have difficulty in meeting their local share will receive a higher rate, which will be set by the end of the year.

Local authorities now receiving more than 52% will have funding reduced over up to nine years, at a reduction of 1% a year.

Mr Harland said some local authorities had ''grave concerns'' over the changes in rates.

''This may lead to affordability issues for many rural and provincial councils and result in a high impost on local ratepayers to maintain existing service levels,'' he said.

The origins of what used to be known as roading subsidies can can be traced back to the National Roads Amendment Act of 1959. Government funding was distributed through the then-National Roads Board.

The fund distributes money not just for roading, but also for public transport such as buses and trains and even support for taxi services for the impaired.

Last year, the comprehensive review began looking at whether past factors were relevant.

Last month, the agency considered the FAR for individual local authorities which would apply from the 2015-16 financial year.

The final rate for each local authority will depend on the recently released 2013 Socioeconomic Deprivation Index. The index, used to allocate government funding, assigns scores from 1-10 for local areas, with 10 being the most deprived.

After that has been applied, local authorities will know their new subsidy rates.

Decisions so far
• Starting points for funding assistance rates will range from 45% for Thames-
• Coromandel to 91% for Chatham Island.
• Future funding average across all local authorities will be 52%.
• Rate changes will be staggered up to nine years.
• No funding for a local authority will drop by more than 1% a year in the first three years.
• Changes for emergency works.
• Changes for Department of Conservation roads.
• No changes to Total Mobility funding for at least three years.