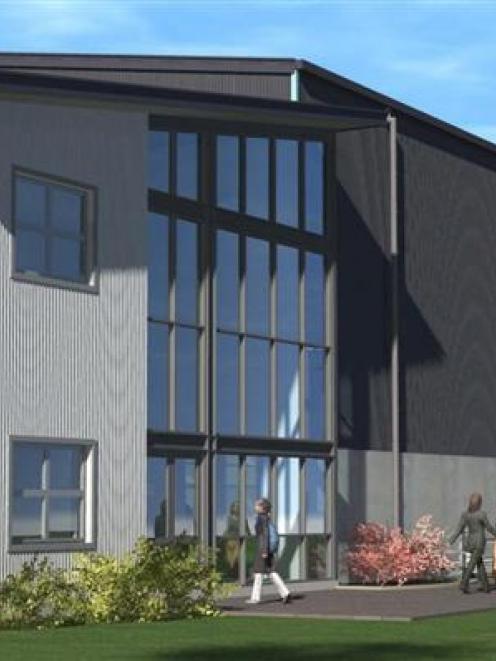 An artist's impression of the exterior of the proposed Clutha Recreation Centre. Graphic supplied.
A plan to build a $5 million sports venue in Balclutha is raising the hackles of some rural community boards. Rachel Taylor reports.

Balclutha's version of Dunedin's stadium debate is about to unfold, with the Lawrence-Tuapeka and West Otago community boards set to make submissions against the Clutha District Council's proposal to increase its funding contribution to the Clutha Recreation Centre.

Both boards are arguing it is unfair to rate their communities, who, with the exception of Lawrence netballers, will not use the facility.

Clutha district ratepayers are being asked to make submissions on the council's proposal to increase it's contribution to the centre, and on how the council contribution should be rated. 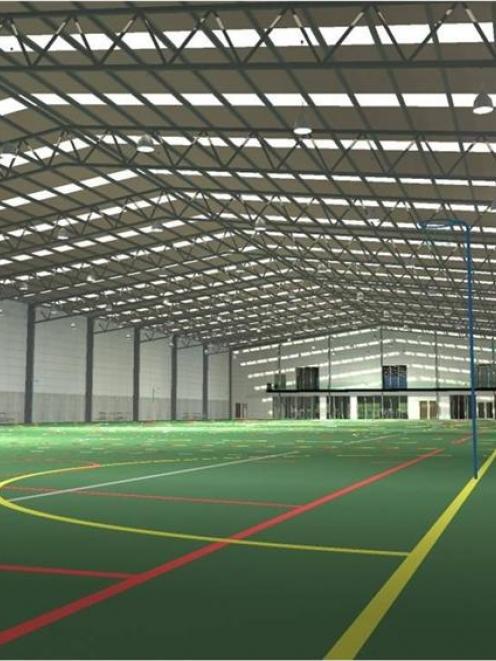 An artist's impression of the interior of the sports centre. Graphic Supplied.
The cost of building the centre is estimated at about $5 million.

It would be used as a indoor multisport facility and gym, and to provide a place for community groups to hold meetings.

The council was originally footing $1.2 million, with the balance provided by fundraising, undertaken by the Clutha Recreation Centre Inc.

Due to some funding sources evaporating, the CDC is proposing to increase it's contribution from $1.2 million to $2.5 million, and its preferred method of funding is to impose a uniform charge across the Clutha district.

This means district households would receive a rate increase that varied depending on where they lived.

The CDC included a submission form as part of the Draft Annual Plan, asking people to indicate whether the council should increase funding to the centre and which of the three funding options was preferred.

Clutha District Council chief executive officer Charles Hakkaart said so far, the council had received only 20 submissions, but the Otago Daily Times understands the Lawrence-Tuapeka and West Otago community boards were preparing submissions on behalf of their communities stating they firmly opposed the rate increase.

Lawrence-Tuapeka community board member Roger Cotton said the only people in Lawrence who would use the Centre were the netballers, "and they have to use it because they have no choice".

"I think it's a bit unfair to ask the rural community to fund this."

The Lawrence community was currently funding its own projects, and many of the comments Mr Cotton had heard indicated Balclutha needed to undertake more of its own fundraising, he said.

"The increase is asking a bit much of the ratepayer."

The West Otago community board will be lodging its submission before May 10, and will be coming to the Clutha District Council to speak to it on May 20.

"The people of Kaitangata, Clinton and Kaka Point should be rated for it, because they are going to use it. We won't."

Mr Herbert said there should be an option four, which would not include West Otago.

Both members spoke of projects their communities had previously undertaken, with funding and labour provided from within their respective communities and without rating the rest of the district.

Council chief executive officer Charles Hakkaart said the council was of the opinion [the centre] would benefit the whole community, and if people in West Otago and Lawrence were not happy with the council's proposal, they needed to let [the council] know.

"They need to make submissions to the council to make their views known - that's why they are consulting.

"We urge anyone who has an opinion, good or bad ... to fill in a submission form and let us know their view," he said.

"Responses will be presented to councillors to help them consider the community's response and make a final decision."

Mr Cotton said there was much apathy and "people need to realise this will affect them."

STORY OF A SPORTS CENTRE
The Clutha Recreation Centre story so far. -

July 2004: Idea raised at a meeting as part of community "wish list".

October 2004: Committee formed to investigate the idea of building a multipurpose sports centre in Balclutha.

January 2005: Committee releases details of proposal for a centre incorporating swimming pools and a gymnasium to be built in Centennial Ave.

December 2005: First draft of study confirms the facility is needed for Balclutha.

April 2006: $1 million earmarked for improving the Centennial Pool may be reviewed.

May 2008: Study rules out Dreaver Courts as site. Preferred option now for facility on the back of the grandstand at Balclutha showgrounds.

June 2008: Clutha District Council agrees to contribute up to $85,000 for finalising design of proposed centre.

May 2009: Council agrees to give centre $1.2 million if fundraising committee raises 70% of necessary money.

June 2009: Clutha district councillors agree to a 50-50 split on payment of $1.2 million between Balclutha ratepayers and rest of the district.

November 2009: Plans for new centre, costing about $5 million, to be built on Dreaver Courts site, unanimously endorsed at public meeting.