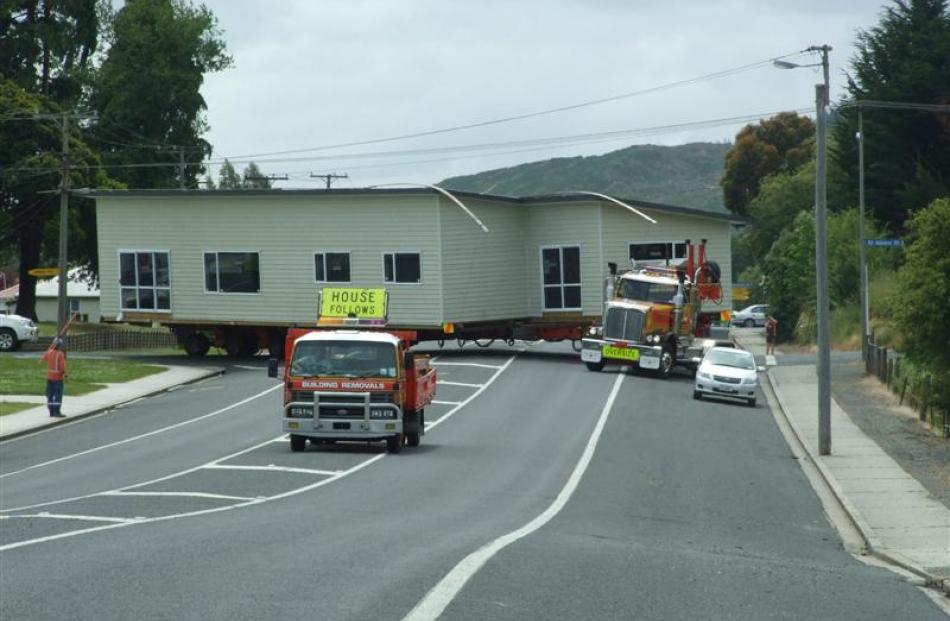 The Owens' home is manoeuvred around the St Albans/Eddystone St intersection in Kaitangata yesterday as it is shifted to the Owen family's section. Photo by Helena de Reus.

The sight of a large home being trucked down the main street of Kaitangata yesterday drew a crowd of residents keen to see the next stage in a charity house build.

The home is a labour of love by a large number of volunteers to build a home for a Kaitangata family.

Derek Craig, of Cromwell, and a committee of about a dozen others, created ''Operation Owen'' to construct a purpose-built home for Jodie and Terry Owen. The couple's two daughters, Charli (8) and Meg (3), have undiagnosed cerebella ataxia. The condition affects the girls' co-ordination and balance, and makes them tire easily.

Mr Craig designed the house, and the Owens have worked with him to ensure the house suits their needs. Kings House Removals spent yesterday morning preparing the house for the shift, moving the building to the Owens' section on Start St in the township. It moved the house for free.

Mr Owen said the family still found it hard to believe a house had been built for them.

''It's still overwhelming, but Charli is pretty excited about the new house,'' Mr Owen said.

The couple also welcomed an addition to the family last month - son Baxter.

Clutha Mayor Bryan Cadogan, a member of the Operation Owen committee, said the amount of time people had given to the project was ''phenomenal''.

About 100 people worked on the house at Labour Weekend, with another 30 running the kitchen to provide volunteers with hot drinks and meals.

''People have really got in behind the project, and the time, money, and materials donated has just been amazing.''

Interior work is still to be completed, from lining the walls to carpeting and decorating.

Mr Cadogan said the build was slightly behind schedule, and it was hoped the house would be finished by the end of March.