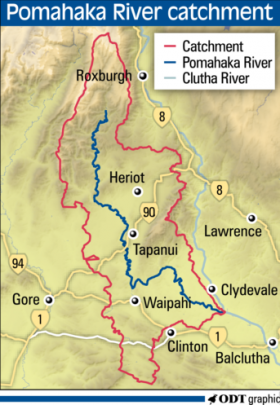 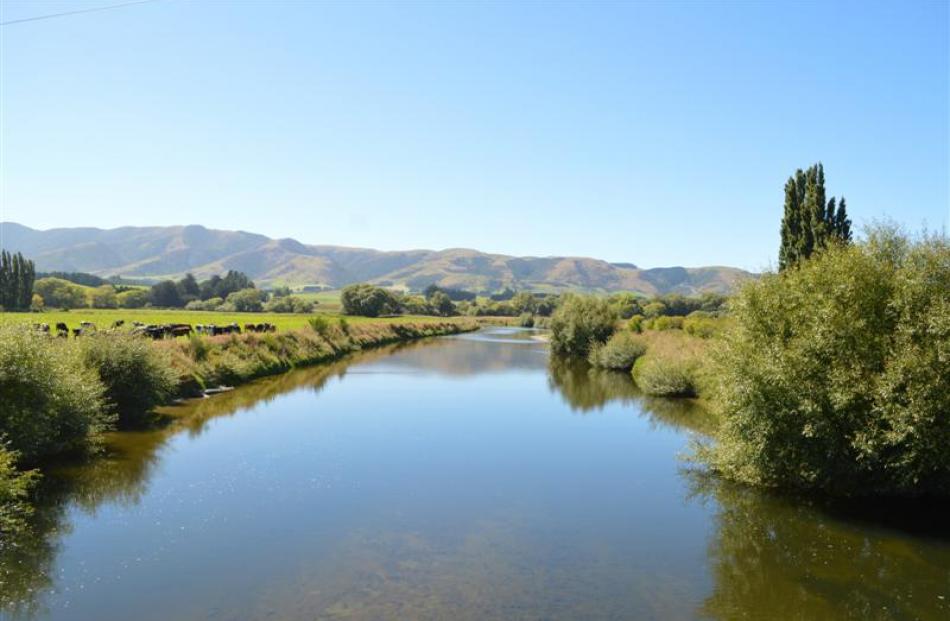 The Pomahaka River looking downstream from a bridge on State Highway 90 between Tapanui and Waikoikoi. The Blue Mountains can be seen in the background. Photo by Helena de Reus.

All is not well in parts of the Pomahaka River, which is tucked away in the southwest part of Otago. Helena de Reus investigates the catchment's water quality and surrounding issues.

Farmers and organisations are looking at ways to improve the declining water quality of the Pomahaka River.

Located in the southwest part of Otago, the Pomahaka River flows for about 98km and is one of the larger tributaries of the Clutha River.

The adjoining land use was dominated by sheep and beef farming and there was at least 10% forest cover, he said.

The condition of a river system is determined by how, and how much, land around it is used.

The river has its origins high up in the Umbrella Range behind Roxburgh, and flows through productive farmland around Tapanui and Heriot to join the Clutha River near Clydevale.

ORC state of the environment (2013) reporting at Leithen Glen (the upper site) indicated the water quality for all parameters was good, while at Burkes Ford (lower site) the water quality was rated as fair, due to increasing levels of E. coli and nitrite-nitrate nitrogen.

Dr Palmer said the water quality in some Pomahaka tributaries, such as Heriot Burn, Crookston Burn and Wairuna Stream, was poor, which could be because of the intensive agriculture on the tile drain networks in the high rainfall catchment.

Tests between 2001 and 2011 in both the upper and lower main-stem sites, as well as the lower Waipahi River site, showed an increase in phosphorus levels.

The regional council completed an intensive water quality and ecological monitoring programme in the catchment in 2008-09.

''One of the main findings from this was that the health of many of the tributaries was badly affected by sediment, E. coli and dissolved reactive phosphorus,'' Dr Palmer said.

He said the results were being worked through with catchment landholders.

Last July, the NZ Landcare Trust started a year-long project to bring together farmers and ''stakeholders'' to investigate a catchment plan for the Pomahaka. Landcare Southland regional co-ordinator Janet Gregory said the project, dubbed ''Pathway for the Pomahaka'', focused on management practices that affected water quality.

It is funded by the Ministry of Primary Industries through the Sustainable Farming Fund with support from Dairy NZ, Ravensdown Fertiliser Co-op and Beef and Lamb New Zealand.

''This is a whole-catchment project taking in all the different land-use types from dairying, deer, sheep and beef, to forestry, and the plan is to identify the different issues and management systems that impact on water quality ...''

The group would work together to find ways to improve the water quality and to develop a catchment plan.

The group includes farmers from across the catchment and organisations that have an interest in the area.

The discussion included looking at practices that would help landowners meet new regulations associated with the ORC's water plan and Fonterra's clean water strategy, she said.

The ORC says the Pomahaka River is recognised as one of the more popular trout fisheries in Otago, with both riverine and sea-run brown trout. The river and its tributaries have substrate (sediment) important for trout spawning, and habitat for juvenile trout.

Jeff McKenzie has farmed at Heriot, West Otago, for several decades and has noticed the water quality of the river deteriorate over the past 10 years.

''We used to swim in the river all the time, and it never looked the way it is now.''

Erosion and farming development in the area were major factors in the decline, he said.

''Erosion has been a big concern. It isn't helping the quality at all.''

Everyone in the catchment needed to be aware of the declining quality and work together to improve it.