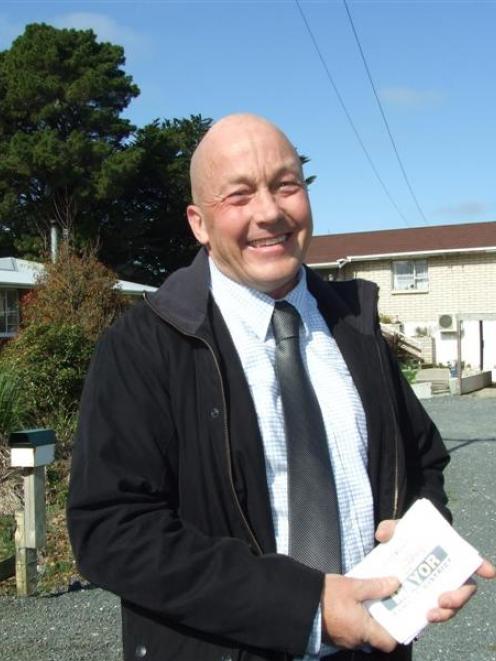 He stood for mayor against Juno Hayes three years ago, and lost by only 958 votes.

Now, Bryan Cadogan thinks the Clutha district is feeling the economic pinch and is ready for the ideological change he can provide.

Sustainable growth for the district by tying rates to the rate of inflation and focusing on core services is something he believes will stop the population decline and provide amenities that will attract people to the district.

A member of the Clutha Rugby Club and a Clyde St retailer, Mr Cadogan has clear views on the Clutha Recreation Centre and the main street upgrade and traffic flow issues.

His first term as mayor would be about "getting real", by providing the core services at an affordable price, with enough left over so the district could move forward, he said.

"I can't say on the one hand that I'm going to hold rates to a realistic level, and then offer the world."

Why are you standing for mayor?
It's time for change.

What do you think needs to change?
My whole stance and my whole focus is that I want an ideological change. Everyone that I'm talking to is finding things really hard going at the moment. I believe that morally, the council has to have it that the rates are tied to the rate of inflation.

The last three years, the rates in Balclutha have gone up over 20%. If this is allowed to continue, the pressure on the family unit ... they've got nothing left for themselves.

I know the flip side of that is people are going to say you're going to jam the handbrake on. No, I'm not. I've got an ideology of thrift.

What do you mean by thrift?
Well, I'm self-made. I did it by working hard and saving. That's just the way I was brought up.

Where is that going?
Its not sustainable. From a leadership perspective, I want an ideology that council has got to start tying the rates in with the rate of inflation.

What about essential services?
The whole focus is on core services. The very basic ones, the water the sewerage, they are a given and we've got to focus on them.

The Clutha district is funny. The dynamics of the Clutha district [are] a declining population, the second largest roading network, very low average wage ... the core services that you expect, your water and sewerage, they have got to come first.

What do you think of the recreation centre and the main street upgrade?
Two totally different things. The rec centre is already a done deal.

I'm heavily involved with the Clutha Rugby Club and the numbers of all sporting groups in this district are going down.

So you see the rec centre as being an essential service?
Yes, I do. The main street really frustrates me. There have been three reports done on it, money's been spent, nothing's been done.

Our town and our district has been stagnating for years waiting for something to happen. The money's spent, we've had the three reports done, now we've got to spend it again. That's where I see savings. Why wasn't the road done 20 years ago? Why wasn't a sports centre done a long time ago?

What do you think the council's biggest achievements have been?
I've seen nothing happen in the last three years. What has happened? I really mean it's time for change. We cannot afford the old ways.

How are you going to change things?
I've got a record of innovative thinking. It's going to always be based on that ideology of let's make sure it's affordable, and let's get out there and find a way.

Does the doctor shortage concern you at all?
Oh yeah. Once again, it's that critical mass. Our population's been allowed to decline. Our areas have been stagnating.

The doctor shortage is the same as so many other shortages. We don't have the critical mass any more. If the population went up, so would the [number of] doctors.

How do you arrest the decline?
All the council can do is focus on getting its house in order. Giving the confidence to people that if you are living in Balclutha, or Milton or on a farm, we are not going to outstrip your ability to pay.

I have to be realistic; there are going to be sacrifices with what I'm proposing, but if we don't take that alternative, the impact on the family unit, the impact on people's self worth, I think the negatives outweigh the benefits.

What are you views on changing the traffic flow?
Disastrous. It cannot be done. We've got the perfect system.

What we do need is some aesthetic development in the main street. Let's put some trees out, let's create some places to sit. Let's make it an aesthetically more appealing place.

But at the moment, ratepayers are paying for the heavy traffic that flows down Charlotte and James Sts. Yes, and they are not [paying for] Clyde St [which as part of State Highway 1 is funded by the NZ Transport Agency].

The traffic has to flow through the town. After 5pm the trucks come whistling down SH1, so it's not a 24-hour thing. It's how we have to have it. If we don't, we will kill our only genuine retail sector in the district.

A lot of retailers at the moment are holding on. That would be the issue that finishes it for them. Change the aesthetics, but please, do not change the traffic flow.

Why do you think you would make a good mayor?
I think I offer an ideology most people can relate to. I've got a diverse background. I've known hard times, I've know desperately hard times when I was younger.

I owned a farm, I worked in shearing for 18 years, I did 12 freezer seasons, I've been in real estate, I've been in business, I've brought up two teenage kids with every crisis you can imagine, I've walked in people's shoes, so most sectors of society I can relate to, and I think that makes a difference.