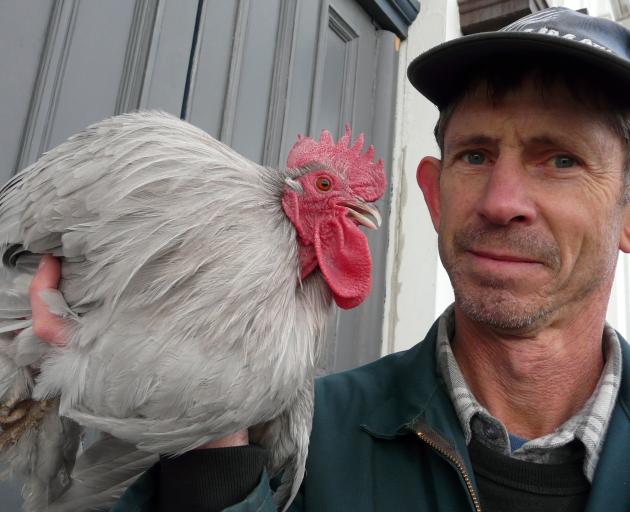 Milton Poultry and Bird Fanciers Club president Neill Harrison and lavender pekin rooster George keep an eye on each other before today and tomorrow's 72nd annual Milton Poultry Show at the town's Coronation Hall. PHOTO: RICHARD DAVISON
A dislike of chickens has proved no obstacle to running a local poultry show for one Milton woman.

Milton Poultry and Bird Fanciers Club secretary of 15 years' standing, Judith Waters, said she fell in with her feathered far-from friends by family association, rather than any great affection for the domesticated avians.

In fact, her antipathy went to the extreme.

"It's a surprising thing to say given a lifetime's involvement, but I hate them. They're badly behaved things, so I threaten them with the pot when they're flapping and pecking at me," she said.

Mrs Waters' father was South Otago poultry identity Robbie Robinson, who was secretary of the club for more than 30 years.

"When Dad passed in 2001, I just sort of took over. Every year I try and step aside, but I think the other members must have a funny sense of humour."

Mrs Waters acknowledged her sentiments were untypical of the general membership, as evidenced by the words of club president Neill Harrison.

"You look at their particular shapes, colours, patterning and plumage, and every bird is unique. They've got an enduring appeal and fascination for people."

He said preparation for the show's 2pm opening at Milton's Coronation Hall today had gone smoothly, with up to 100 visitors expected over two days.

"We've got about 330 entries, with a fancy bantam feature show and 38 South Island championships to be awarded. It's going to be quite an event."