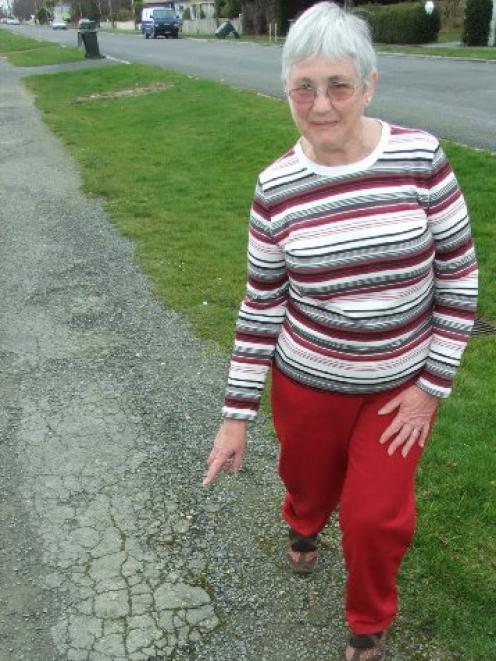 Jennifer Forde fell outside her house in March 1996 and has been asking the council to fix the footpath on Centennial Ave ever since.

She has lived in Centennial Ave for 40 years and says there has never been any maintenance work done on the footpath.

Council district assets manager Jules Witt said the footpath was due to be replaced in the next six to nine months and the delay reflected a shift in the council's footpath maintenance policy.

The council had awarded the district footpath upgrade contract to Demie Contracting, and the Centennial Ave footpath should be replaced by May next year, he said.

This would mark the end of 14 years of letters between the council and Mrs Forde, who sent a petition signed by 17 residents to then deputy mayor Juno Hayes on June 7, 1997.

She told the council there were large potholes in the footpath, along with broken and lifting seal, no seal in some places, poor drainage, no kerbing and no channelling.

In a letter dated June 24, 1997, works and services manager Charles Hakkaart replied the petition had been received and the council was surveying all footpaths in the district.

On August 18, 1997, Mr Hakkaart sent another letter to Mrs Forde saying the "footpath replacement would be reviewed as part of the footpath management asset plan".

In 2007, a consultation document was sent to Milton residents stating the council had set aside $1.5 million for footpath renewal and $2 million for new footpaths.

Milton residents could expect to pay $73 per household for the new footpaths.

"We got more responses to the consultation document than we did to the 2006 long-term plan ...

We were conscious of the fact there are lots of people out there who want their footpaths fixed," Mr Witt said.

Mrs Forde said in June 2008 she received a letter saying the footpath would be replaced within a month.

She asked Mr Hakkaart in August 2009 why the work had not been carried out.

Mr Hakkaart, who was now chief executive, replied on August 10, 2009, that the council had since terminated its contract with its contractor, Fulton Hogan.

A new contract had been awarded to Demie Contracting to complete the district's footpath project, which had been put on hold because it was "likely that financial assistance [from the New Zealand Transport Agency] will be available for these footpaths, which will mean a cost saving for local ratepayers of up to 60%".

The letter went on to say Centennial Ave was "programmed for construction in 12 to 18 months."