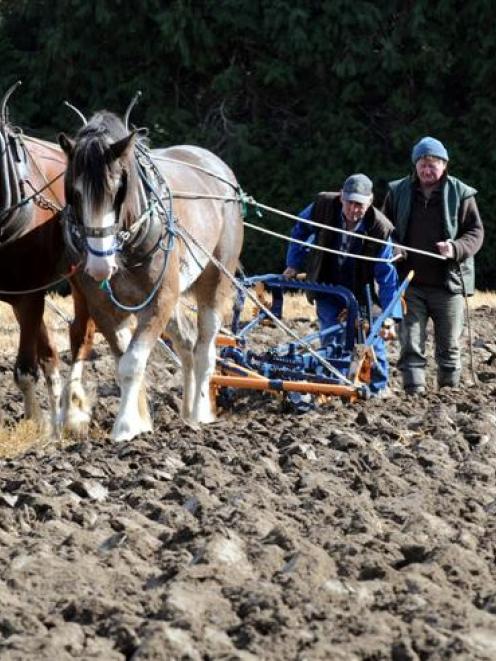 Teamster Snow Cleaver (right), of Lawrence, and ploughman Doc Wilson, of Gore, brave a biting wind as they guide Clydesdales Duke and Tommy on a New Zealand Ploughing Championships practice field near Clinton yesterday. Photo by Stephen Jaquiery.
Spectators at the New Zealand Ploughing Championships this week will see some real horsepower in action.

Horses will be pulling ploughs alongside tractors in the event near Clinton.

Practice for the championships began yesterday, with competitors testing the stubble plots before trying out the grassland today.

Teamster Snow Cleaver, of Lawrence, and ploughman Doc Wilson, of Gore, who arrived with a team of two Clydesdale horses, said they had competed together a number of times and enjoyed the "good camaraderie" the activity offered.

The emphasis was on keeping the furrows straight but the opening and finishing "splits" were the most challenging, they said.

"To finish right, you have to get a good crown," Mr Cleaver said.

Mr Cleaver said it took "a few ploughs to work it all out" behind the horses but they had been working together for three years now.

The pair have had several wins this season but said each competition was different and the outcome was always unpredictable.

They had also noticed more horse teams in ploughing competitions, when six or seven years ago there were none.

Mr Cleaver worked with horses on the family farm and began competing in horse-drawn ploughing six or seven years ago.

"I've been ploughing all my life. But it's not just ploughing - there's wagons, everything really."

He recalled one event where he didn't have a good start.

"Everything went wrong that day, but we won despite the rocks, mud and baleage."

Conventional, reversible, and vintage ploughs will also be seen in competition at the championships this week.

The organiser and current national champion of the conventional ploughing section, Scott McKenzie, said all four sections would be judged on the straightness of furrows, the "ins and outs", and would operate under time and depth limits.

The 38 competitors have a total of three hours to plough their plots.

The two competition days - Friday and Saturday - would be held whether the weather was good or bad.

And if the latter?