Mrs Fox stepped down from 40 years of service to Waitahuna and Lawrence schools at the end of last term, and says only now, as she watches her former charges pass by twice a day, has she begun to reflect on her time at the wheel.

When she began the local run in 1980, it was more by accident than design.

"I had kids of my own, and my husband, Bryan, bought the bus and acquired the contract, as he ran the Waitahuna garage.

The original Ministry of Education Bedford bus came without power steering, requiring a rapid acquisition of shoulder strength for the slender Mrs Fox.

Although later, more modern Isuzus had eased the back strain, passenger behaviour could still be a pain in the neck, she said.

"In the early days, there was no bus controller on board, so you were in charge of discipline, too. Being country kids, they were a bit noisy, but mostly fine, although there was the odd one you’d have to pull up."

Unfortunately, not all passengers were so compliant. 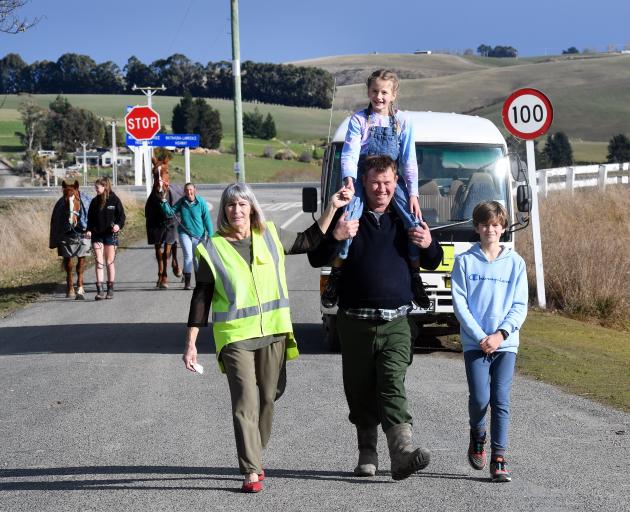 Waitahuna school bus driver Val Fox has hung up her keys after 40 years of service. One of her earliest passengers, David Alderton, of Waitahuna West, walks with next-generation passengers, son and daughter Michael (10) and Elise (9).PHOTO: STEPHEN JAQUIERY

"I was up Polsons Rd one winter’s day picking up a family of five youngsters and getting them settled in, when I turned round to see the family goat had hopped on board.

"He was pretty determined he was going to school that day, and wasn’t budging."

On another occasion, a rare breakdown necessitated an emergency pick-up by ute.

"We had all the wee ones hanging off the back and having a ball.

"Of course, you couldn’t do it nowadays."

Mrs Fox said she had few regrets about hanging up her keys after 40 years.

"It’s time. I don’t miss the driving — particularly the sense of urgency you get every day when the afternoon pick-up is due. But I’ll miss the kids."

One of her earliest passengers, Waitahuna West sheep farmer David Alderton, had since seen his own brood picked up and delivered safely for the past few years.

He described Mrs Fox’s achievement as "pretty awesome", and praised her dedication to the community.

"We always got there safely back in the day, and it’s been quite something to know your own kids are still getting there safely too, thanks to Val."