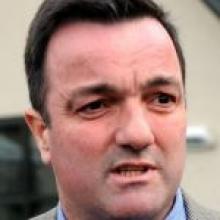 Silver Fern Farms (SFF) chairman Eoin Garden and chief executive Keith Cooper have revealed to shareholders in Balclutha that its two southern sheep and beef processing plants at Finegand and Waitane, near Gore, were safe from closure.

Mr Cooper said the Finegand works in South Otago could be upgraded to operate all year round, processing sheep, beef and venison as SFF secured new markets which require a year-round supply of meat.

He said there were no plans or time line to transform the works, which operated one beef and four sheep processing chains.

"This is a high-level strategic view to keep costs down, utilise plants better and attract employees by getting away from seasonal work to become a longer-term employer."

In the past 18 months, SFF has spent $18 million upgrading effluent treatment facilities at Finegand and $2 million introducing chilled meat technology at Waitane near Gore.

Mr Cooper said it would not have made that capital investment just to close those works.

"It's no great surprise to hear they are safe."

It had closed a lambskin processing operation at Finegand, deer processing plants at Burnside in Dunedin and in the Waikato, and the Oringi meat works in Hawkes Bay.

But this has not eased pressure on meat companies to rationalise lamb-processing capacity in the South Island.

Land use change from sheep and beef to dairying was expected to result in an estimated three million fewer lambs available for slaughter in Otago and Southland in the coming two years.

Alliance Group in Invercargill had previously said it had no plans to close any of its eight meat works, and chairman Owen Poole reiterated that yesterday.

"We have no immediate plans to do anything in terms of plant rationalisation."