‘Like water off a duck’s back’: Ruru rejects criticism of performance 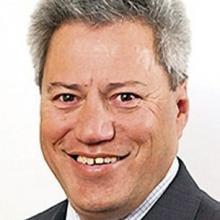 Steve Ruru
Southland District Council’s chief executive Steve Ruru has dismissed a challenge to his performance and competence at a public meeting.

Yesterday, Cr Don Byars caused a stir in council chambers when he raised concerns about the CEO’s ability to award contracts "fairly".

He claimed Mr Ruru was awarding contracts "that are costing us more" in the tender process.

The comments followed a unanimous decision by councillors to sign up to the Government’s $761 million Three Waters Reform Programme funding package.

Mr Ruru had been tasked with finalising funding with other Southland councils, setting up terms and conditions with the Government and developing a procurement plan. After that, he would award contracts.

Speaking to the Otago Daily Times after the meeting, Mr Ruru quipped: "My job is to give frank and robust advice and we will continue to work with new councillors who are still learning the ropes."

He defended his capability as chief executive and said Cr Byars’ comments were received "like water off a duck’s back".

"My job is to implement the views of the majority, not of a single councillor."

After the meeting, Cr Byars said he might not have explained himself as well as he had hoped.

He stressed the need for "checks and balances" and said he wanted more "oversight" from councillors when it came to awarding contracts."

He believed there should be at least one more person overseeing contracts to ensure a more democratic process.

However, he expected the procurement and tender processes would be further worked on by the council in coming weeks.

During the meeting, and in response to Cr Byars’ claims, Mr Ruru asked him several times if he had a problem with his performance — to which he replied "yes".

Cr Byars said he was "not comfortable with awarding contracts to the highest tender".

"If you have concerns about that tendering process, then that’s actually a procurement plan process issue, so I suggest you put forward a motion that requires a procurement plan to be brought back to this council for approval," Mr Ruru said.

He also suggested Cr Byars put forward a motion to further discuss the issue "in an appropriate forum".

Mayor Gary Tong said it was an option for Cr Byars to put forward a motion to delegate authority to Mr Ruru in consultation with the mayor and the chairman of the services and assets committee, but said there was no need "to get into that realm".