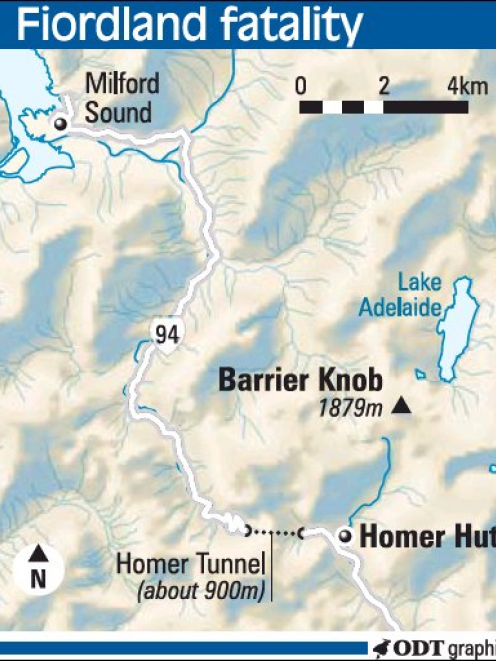 believed_lone_australian_fell_to_death_4d3c112d59.png
The body of a 48-year-old Tasmanian holidaymaker was found by a search and rescue helicopter crew in the mountainous Lake Adelaide area of Fiordland National Park yesterday afternoon.

Sergeant Brock Davis, of Invercargill, said it appeared the man died after a fall at Barrier Knob, about 3km north of Homer Hut.

He set off from Homer Hut on a lone three-day tramp over Gertrude Saddle on Thursday, planning to emerge at lower Hollyford Rd yesterday.

Sgt Davis said he did not know how far the man fell, but it could be up to 200m.

His body was located by a Southern Lakes Helicopters crew just before 5pm, after less than three hours' searching.

It was winched out early last evening, between 6pm and 8pm.

The alarm was raised by the man's wife when he failed to return yesterday morning.

He was on holiday in New Zealand with his wife and three children.

It was not known how long the family had planned to visit.

Sgt Davis did not know how experienced a tramper or climber the man was, but the area was mountainous, and many trampers used climbing ropes to negotiate it.

It was unknown whether the man had had climbing ropes or a locator beacon.

The death would be referred to the coroner, Sgt Davis said.

It was not believed the man had been affected by extreme weather, he said.

It was highly likely he had fallen on the first day of his tramp, Sgt Davis said.