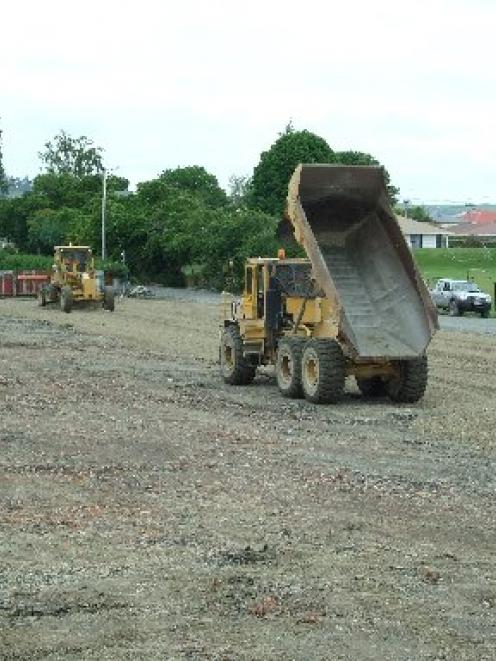 Mike Hurring Contractors staff dump and grade loads of gravel over the old Dreaver Courts site in Balclutha, preparing the ground for the Clutha Recreation Centre building. Photo by Rachel Taylor.
The committee raising funds for the $5 million Clutha Recreation Centre will not approach the Clutha District Council to make up any shortfall if it did not reach the new $1.1 million target, committee chairman Jeff Seymour said yesterday.

At a meeting earlier this week, the Clutha Recreation Centre committee decided to raise money for a multi-purpose floor surface, costing $300,000 more that the original $800,000 budget.

Mr Seymour said there would be a fundraising push over the next two to three months.

"We think it's very achievable, and depending on what we get, by the end of February we will be able to make a call [on which surface to use]."

The fundraising campaign would involve "a combination of different things", including sponsorship and naming rights, he said.

The committee had originally budgeted $800,000 for the fitout, but on Monday decided to try raising a further $300,000 for a multipurpose surface with a 25-year lifespan that could be recoated, rather than needing full replacement.

If the committee was not successful in raising the extra $300,000, it would continue to build with the floor surface it had originally budgeted for.

Groundwork had been going on for a couple of weeks, and the main build was anticipated to start in mid-December, Mr Seymour said.

He was expecting the project to take about six months.

The contract for site preparation had been awarded to Mike Hurring Contracting, and the main build contract to Calder Stewart, he said.

The subcontracts for the building fit-out had been tendered, but had not been awarded yet.

Balclutha had not had a project of this size for a long time.

It was a major project, and very positive for the community, he said.

"We don't anticipate going back to the Clutha District Council; we have to raise this money ourselves."