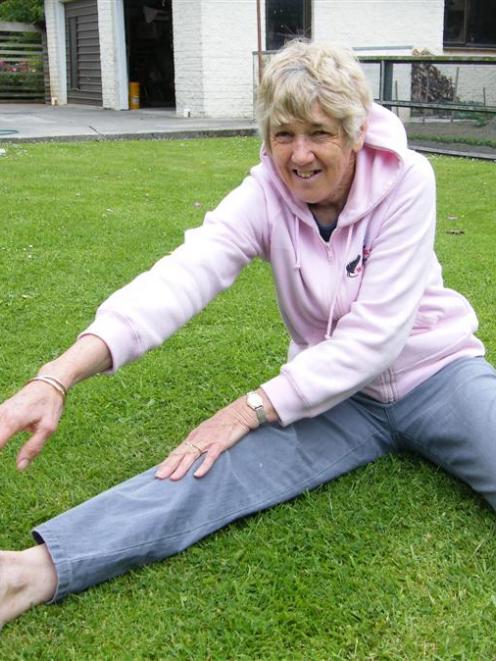 ‘‘I was hoping I was in good form - I don't go to a meet unless I have done the training,'' Jones said.

Jones strained a muscle in the heel of her foot during training leading up to the South Island Masters Championships at Mosgiel's Memorial Park last weekend.

‘‘According to the physio, I have trotted on it hard and twisted it,'' Jones said.

But, the physio's diagnosis came after Jones persevered through the discomfort to win the 100m and 200m at the championships, setting new records in each.

Athletics has provided Jones with an opportunity to learn and love a sport. Born deaf, Jones said it was difficult to play team sports.

‘‘Team sports were no good to me. So I took up athletics at school and I thoroughly enjoyed it,'' Jones said.

And ever since then Jones has been involved with athletics.

‘‘You meet up with people that you met a year ago and you just pick up on what you have been doing. If there's new ones coming in you tell them what to do. You clap the last in and you clap the first person in,'' Jones said.

Jones said officials at the championships calculated the age and time set by competitors to come up with a percentage that placed them in a worldwide level.

Track was not the only area Jones featured in at the championships last weekend.

Had she been able to get some time off work to attend the events on the Friday night she would have competed in the hurdles and triple jump as well, she said.

This year has been a fruitful year for Jones who picked up seven gold medals at the New Zealand Masters Games in Dunedin earlier this year. Her first grandchild was born during the event.

With demanding goals such as the Kepler Track and the New York Marathon still on her to-do list, Jones is as fit as a fiddle for a woman in her late-60s.

‘‘Get out and have a go. Check with the doctor that you can actually do the running. If you can, there's books available for you to learn,'' Jones said.
The Ensign
Comment now