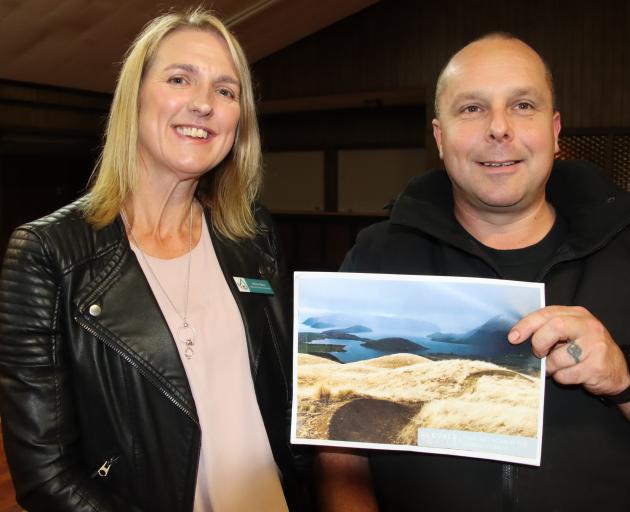 Ardlussa Community Board member Hilary Kelso and Riversdale mountainbiker Daniel Butler are very excited about a concept plan to build mountainbike trails through the Waikaia Forest. PHOTO: SANDY EGGLESTON
A plan to develop mountain bike trails through the Waikaia Forest could have significant economic benefits for the township.

The 700ha forest owned by the Southland District Council is located on the outskirts of Waikaia and is within easy walking and biking distance.

IFS Growth manages the forestry for the council.

A public meeting held at the Waikaia Community Centre on Wednesday was called by the Ardlussa Community Board, which has investigated the possibility of the trails, to keep people updated on progress.

The board has permission from the council to use the land.

Mr Ruddenklau said in the year prior to March 2020, 193,000 cyclists rode trails located within three hours’ drive of Waikaia.

"There’s a massive pool of people close to us ... it’s a big, big money-spinner."

In Queenstown, in 2017, income from mountain biking was $25million, with $65million spent in the town attributed to mountain bikers, he said

The industry in the town employed about 340 people.

Mrs Kelso said the project fit in with the Government’s emphasis on encouraging local tourism.

"This proposal is for all New Zealanders to enjoy, not just locals, not just Southlanders," Mrs Kelso said.

"The mountain bike track will bring many opportunities to Waikaia," she said.

The sport was growing in popularity.

"Cycling in New Zealand is a growing multimillion-dollar activity that will bring huge social economic and cultural growth, not just for Waikaia but to the Ardlussa area and the whole of Southland."

The council hired bike trail designer Tom Hey, of Queenstown, to develop a concept plan of where trails could go, which was shared at the meeting.

The proposed trail network consists of 25km of trails ranging from easy to expert.

The cost of the project, which includes a $90,000 pump track, is estimated at just under $1million.

The idea of the trails was mooted by Daniel Butler, of Riversdale, who approached Mrs Kelso.

Mr Butler said his family were keen mountainbikers and had ridden through the forest.

A charitable trust will be formed to manage the project.