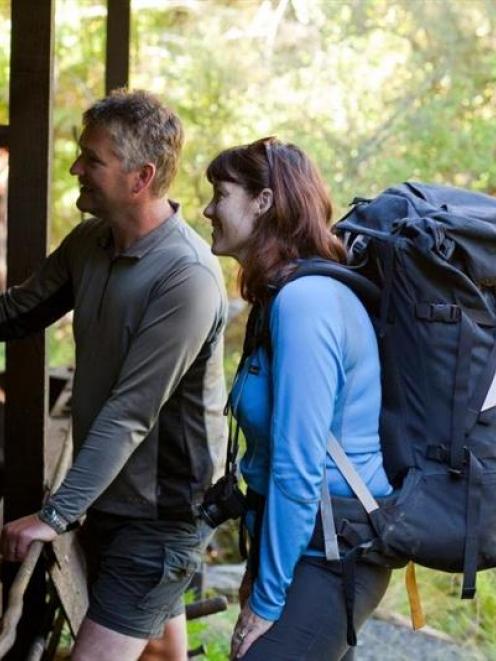 Trampers inspect sawmilling relics and an interpretation board on the Rakiura Great Walk track. Photo by 90 Seconds/DOC.
The 20th anniversary of the official opening of Stewart Island's Great Walk, the Rakiura Track, was marked last week.

"Rakiura was the first as far as we are aware, but we can't find any documentation to prove that," Ms Pasco said.

No formal function was being held to mark the anniversary.

It had been planned to hold a celebration involving Doc, local Maori and others at Port William, but Ms Pasco said the wharf there was unable to be used and it was not possible to get a large group of people into the area at the same time, except by boat.

"We're just noting the anniversary and encouraging people to come and enjoy the track and Stewart Island."

The loop track was completed in the 1980s when what was initially known as the link track was formed to connect Port William and North Arm.

In the early 1990s that section was upgraded and many kilometres of boardwalk installed over the soft peaty terrain.

A fresh upgrade had seen ageing and substandard boardwalk removed and the track improved , and huts given a face-lift, Ms Pasco said.

Last summer, more than 2700 people walked the track, almost half of them New Zealanders.

• Created in the 1980s and extensively upgraded since.

• Can be freedom walked.