By Marjorie Cook
0 Comments
The mysteries of nature fascinate Wanaka gardener Loris King, who is enjoying the second flowering of a Himalayan lily that has decided to sprout in a narrow, shady spot of her garden.

Mrs King (85) is a former real estate agent and businesswoman and has lived in her Brownston St house since 1964.

The lily surprised her when it first flowered in December 2014.

She did not know where it had come from, so popped along to the nearby Otago Daily Times office and convinced a reporter to come down and take a look.

A photo of her and the lily was duly published in the newspaper and she resolved to share the moment again in seven years’ time.

"They said it will grow high like this from a seed. You can obviously take the bulbs off from the bottom but it doesn’t get as high.

"So this obviously came from a seed but I have no idea where I got it from." 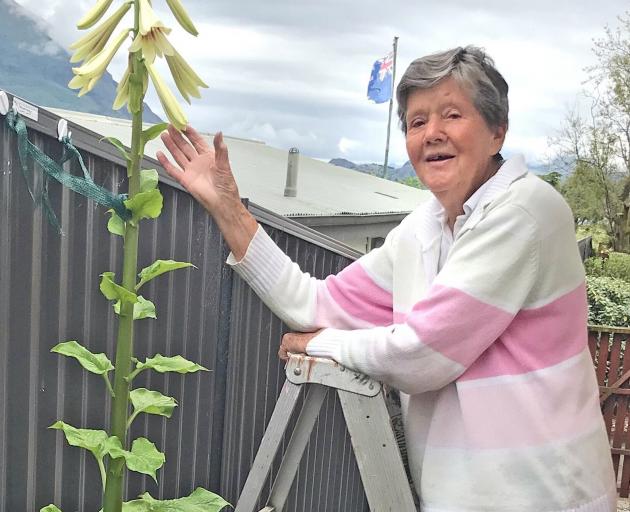 "How they know, I will never know. But isn’t it amazing?"

On October 19, she began marking the plant’s growth.

In one month it doubled its height.

The aromatic flowers were now well beyond her reach, and she had to climb a ladder to get the sense of its perfume — something she would rather not do now — climb the ladder, that is.

This year’s spring had been surprisingly lush in Wanaka and Mrs King, who maintains a large vegetable garden, said the heat had been intense.

The longtime campaigner to protect Pembroke Park, just over the road from her house, said she was lucky to live in such a beautiful spot.

She and her husband won the land in a county council ballot in the 1960s.