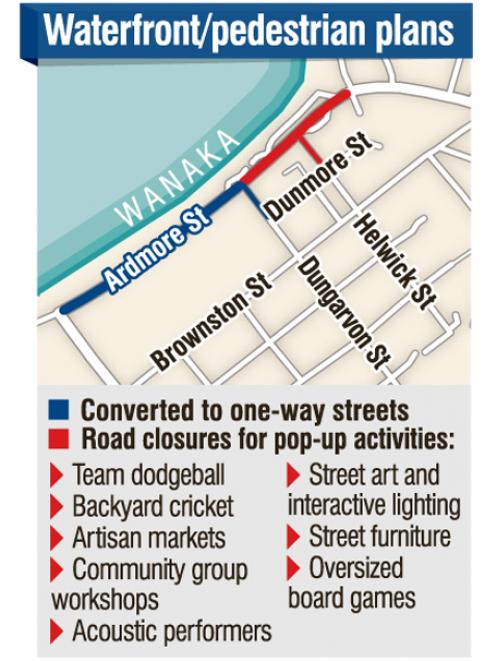 A pedestrianised town centre is to be trialled next month in Wanaka.

The Queenstown Lakes District Council announced yesterday parts of Ardmore and Helwick Sts would be closed from March 14 to 19 to trial a car-free, open-spaced lakefront.

The trial would include the removal of parking on the foreshore, new one-way streets - Dungarvon from Dunmore to Ardmore, and Ardmore from Dungarvon to McDougall - and a dual-access bus entry and turning point near the log cabin.

The loss of foreshore parking would be compensated for with extra parking at Wanaka Showgrounds.

The temporary public open space would be used for pop-up activities like dodgeball, backyard cricket, artisan markets, acoustic performers, street art and oversized board games, among others.

Queenstown Lakes deputy mayor Calum MacLeod said the closures might be inconvenient but he urged people to see it positively.

''These changes are an honest attempt to connect our lake with our town centre for the betterment of our whole community.

''I'm looking forward to it immensely.''

Trout Bar manager Ricky Barbara said while an Ardmore St free of cars ''might look a bit funny'', the trial was unlikely to negatively affect the business.

''I can't see it impacting us in any way. I don't think people drive up and park right outside us. If anything, it'll make it more pleasant out the front for everyone.

''Without people driving past, the outdoor tables will be nice, rather than people honking their horns at others pulling into the middle of the road.

''Most of our customers are foot traffic anyway. People can still park right around the corner, so it shouldn't affect us.''

Pedestrianisation of central Wanaka has been mooted for a while.

Last May, Wanaka Community Board chairman and councillor Quentin Smith said the focus of the Wanaka lakefront development plan and Wanaka masterplan was to progressively remove cars from the lakefront and ''to potentially look at a more pedestrian-focused town centre''.

At the time, a social media poll conducted by the Otago Daily Times showed more than two-thirds of close to 100 respondents wanted to see the town centre pedestrianised.