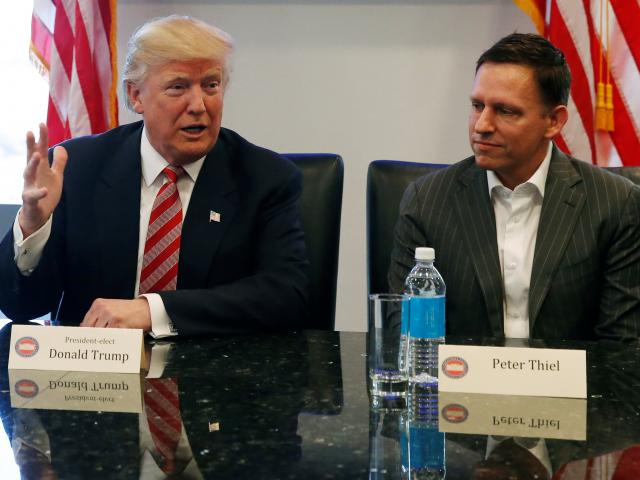 US President Donald Trump sits with PayPal co-founder and Facebook board member Peter Thiel, during a meeting with technology leaders at Trump Tower in New York. Photo: Reuters

Mr Thiel, who lists San Francisco as his residence in Companies Office records, is Second Star's sole shareholder. Forbes magazine assessed his net worth recently at $US2.7 billion.

The sprawling property adds to his local real estate portfolio, following the earlier purchase of a Queenstown mansion.

The revelation comes as the New Yorker magazine reports New Zealand has become the destination of choice for rich Americans seeking a bolthole to hedge against natural or political disaster.

The price paid for the Lake Wanaka property was not disclosed in documents, but the property had a rateable value of $7.8 million. The most recent previous sale of the section, in 2002, was for $10.1 million.

"A most beautiful and picturesque farm, the property offers a secluded and peaceful setting but is just eight minutes' drive from the centre of Wanaka town centre. With Mt Aspiring National Park, a World Heritage Area set in the foreground, Damper Bay provides an outstanding vista from the consented building platform."

Mr Thiel struck gold after being an angel investor in Facebook, following his co-founding of Paypal. He was also an early backer of Rod Drury's NZX-listed Xero.

Mr Thiel has attracted controversy in the United States. His libertarian political views saw him become one of the first prominent businesspeople to support the presidential campaign of Donald Trump, and he also bankrolled Hulk Hogan's defamation action to bankrupt gossip website Gawker.

Mr Wall sold a $4.7 million mansion on Belfast Terrace on Queenstown Hill to Thiel in 2011.

Mr Wall did not return calls this afternoon.

Property records show the Glendhu Bay property was classed as a "pastoral-fattening" property and "uneconomic". It is now listed as a stock finishing property.