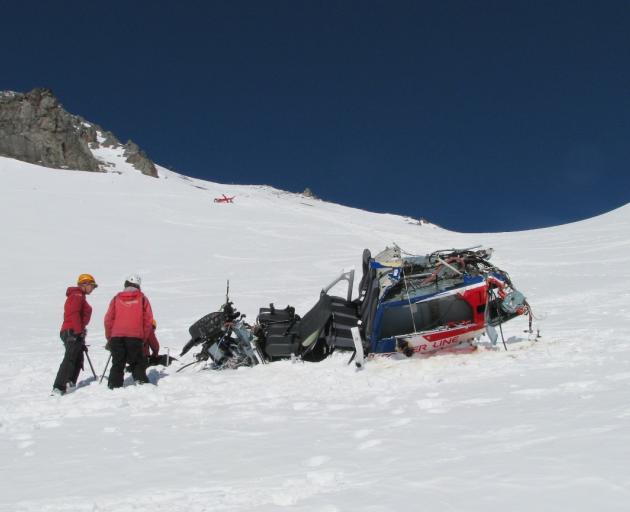 The scene of the crash on Mt Alta. Photo: Supplied
An overloaded helicopter and poor pilot culture have been found to be the causes of the fatal 2014 helicopter crash on Mt Alta, near Wanaka, according to a report issued today by the Transport Accident Investigation Commission.

TAIC’s chief commissioner Jane Meares said the accident happened as the helicopter operated by The Helicopter Line was approaching its landing site.

"The helicopter went below the pilot’s intended angle of approach, so the pilot turned it away from the ridgeline, but he couldn’t avoid the terrain," she said.

The helicopter struck the slope heavily; the cabin broke apart and five of the seven occupants were ejected as it rolled 300 metres down the mountain.

"There was no mechanical reason for the accident. The engine was delivering high power and the helicopter was controllable. The pilot was experienced and had trained in mountain flying and heli-ski operations."

"The helicopter was loaded about 30 kilos over the maximum permissible weight, and its centre of gravity was just forward of what was allowed, and was operating at or close to the performance limit for hovering in this situation," Ms Meares said.

The commission found the helicopter’s centre of gravity was around 3cm ahead of the forward limit.

It also believed the accident and others suggested a culture existed among some New Zealand helicopter pilots of operating their aircraft beyond the published and placarded limits.

The commission said such a culture adversely affected the safety performance of the helicopter sector.

It had recommended the Civil Aviation Authority included this potential safety issue in its current helicopter 'sector risk profile' review.

All of the passengers on board the helicopter were New Zealanders.

The other passengers all suffered injuries, and four were helicoptered to Dunedin Hospital.

"The commission found it was very likely that several of the passengers’ seatbelts were not securely adjusted, which made it more likely that they would be ejected," Ms Meares said.

Two further safety concerns were identified by the commission.

First, the operator’s pilots weren’t routinely required to calculate the performance capabilities of their helicopters for the intended flights.

In response to the commission’s report, The Helicopter Line director Mark Quickfall said the company accepted the report’s recommendations and had taken definitive action in response.

"For all the victims of this tragic accident, we are pleased that this report is finally complete.

"We appreciate the delay has been a major frustration for the families involved," he said.