'It's no wonder no-one wants to buy them' 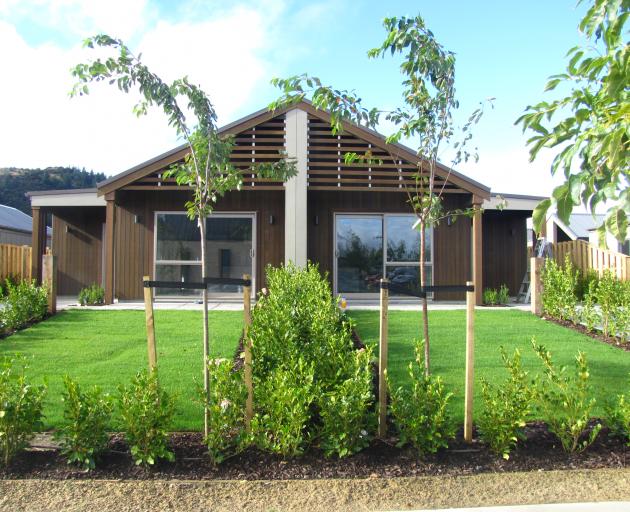 Two two-bedroom KiwiBuild units in a duplex at Northlake, Wanaka. Photo: Mark Price
Kiwibuild is not changing course on its plans to build 211 houses in Wanaka's Northlake subdivision.

As revealed by the Otago Daily Times last week, only four of the first 10 KiwiBuild houses had been sold.

On a visit to Wanaka in September, Housing Minister Phil Twyford announced a total of 211 KiwiBuild houses would be built in the subdivision in the following two years, of which 20 months are left.

When asked if Mr Twyford was likely to review the decision to build the houses, a spokeswoman for the minister said the contract for KiwiBuild homes in Wanaka was ''between the KiwiBuild Unit and the developers''.

A KiwiBuild spokesman told the ODT yesterday ''the terms of KiwiBuild's agreement with the developer have not been changed''.

The spokesman said the six unsold houses were ''now complete and available for direct sale to eligible KiwiBuild buyers''.

Waitaki MP Jacqui Dean said yesterday she considered the houses ''not practical'' and ''not functional''.

''The Government expects Wanaka families looking for a home to pay over half a million dollars for a two-bedroom townhouse that doesn't even have a garage.

''How appealing is a two-bedroomed town house that's attached to another property by a shared wall, with no garage, and costs upwards of $560,000?

Ms Dean said the lack of interest showed how out of touch the Government was ''when it comes to delivering suitable first homes for young Kiwi families''.

The KiwiBuild spokesman responded by saying four of the six homes for sale were stand-alone three-bedroom homes.

''The price of the homes reflects the cost of land and building in Wanaka, and should be seen in context of the
$1.2 million average house price in Queenstown-Lakes, which is up 54% in the past three years.''

You would have to be living in a peculiar sort of bubble to think $600,000 ish is a reasonable or affordable price for a 2 bedroom conjoined house. Add in no off street parking and you would really have to agree with Ms Dean.
Another article in the ODT today laments that Dunedin's average of $430,000 is next to unaffordable. How then can 50% more be affordable?
Yes New Zealand needs a lot more actually affordable homes, but the current ones are being aimed at millionaires, not regular people.

Perhaps the problem is that the developer is still carving out his/her profit margin. State houses in the 1930s were built by the state with no pretence of market mechanisms supposedly making everything more "efficient". Expecting developers to build houses that actually ARE affordable is dreaming when house prices are so inflated and they can get away with charging ridiculous amounts. These houses in Wanaka are not affordable--but they do appear to be cheaply built with mean little bedrooms and no garage or storage space. I wouldn't want to buy one at that price either.

Utterly disgusting prices for small, cheaply built houses. Terrible to think that if I decided to return to NZ I could not afford to buy a house in my own hometown.

Typical Marxist supply economy failure. No one wanted the Trabant neither but because the Russian government forced out other suppliers via regulation, the people had no choice. The coming Climate Change regulations will lead us down this path.

Not quite right Eyes, these houses are being built by developers who are supposedly including some "affordable" places along side their regular priced offers. If the government were building this places themselves you might be right.

The drivers of housing costs need to be addressed overall, including councils only allowing limited land supply, lack of builders and greed etc.

I'm not the only one that sees the danger, Keith. The Reserve Bank and see it as well.
https://www.stuff.co.nz/business/110583962/reserve-bank-warns-that-kiwib...
I'm trying to get a build started and have just got PIM back from Council at a cost of $600 and two months of time.
Seems they are concerned about possible flooding so I need to go thru the Resource Consent process as well.
Appears they have a report that says there is a risk it might flood in the next 500 YEARS, which they need to investagate further.
More money, more time, more crap.
This is why housing is unafordable, to those of us on lower incomes.
Now we have the government coming to the 'rescue' to 'fix' the issue because they say "the market can't".
Yeah, right, NOT.

This policy is so so foolish with our taxes. Building expensive houses that no-one wants in a certain location, and then repeat and expand the programme because some technocrat thinks so and has a budget. The definition of insanity, repeat something again and again and expect different results. North Islanders sucking our taxes dry for another programme that does not work.

Eyes wide open isn't. These houses are being built by your capitalist free market on behalf of a customer with neoliberal methodology. Continuing to frame the world in a Marxist context is nothing but bizarre in a world where neoliberalism (what this actually is) is wreaking ruin.