Machines of yesteryear get a chance to shine to thousands

By Kerrie Waterworth
0 Comments
There was a lot of earth moving in Wanaka yesterday, but it was not due to earthquakes.

More than 70 classic and vintage earthmoving machines demonstrated excavating, scraping, carrying and relaying earth in a giant dirt pit on the first day of the Wheels at Wanaka event at Three Parks.

A capacity crowd of about 3000 watched the earthmovers, dump trucks and wheel loaders give a full working display in three separate sessions at the Terra Cat Earthmoving Extravaganza.

Director Paul Clarke, of Dunedin, supplied 28 of the trucks and said many of the machines were "retired", no longer seen working anywhere in the world. 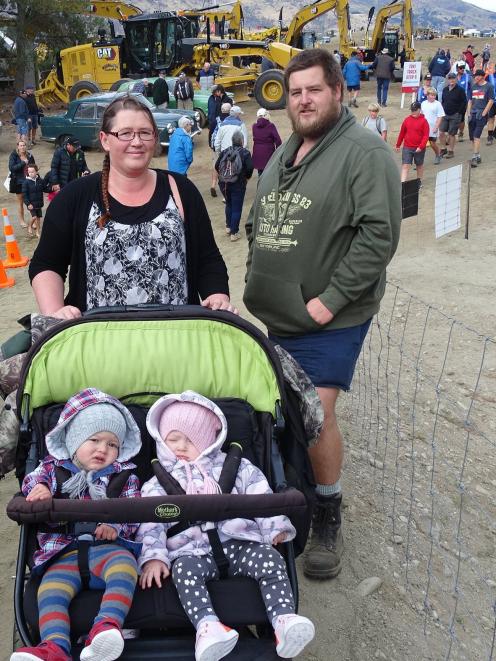 Danielle and Willy Duncan, of Gore, with twins Oliver and Isabelle Duncan (13 months) at the Wheels at Wanaka Terra Cat Earthmoving Extravaganza at Three Parks yesterday. PHOTO: KERRIE WATERWORTH
"We have 76 machines that have arrived from all over New Zealand including Cambridge, Hamilton, Wellington and Invercargill and their owners have had a fantastic input into what is happening today."

Each driver was instructed to operate their machine to its full potential to demonstrate to the public "what the machines of yesteryear were capable of".

Most of the drivers were in their 50s, 60s or older, had decades of experience and loved driving the machines, he said.

Wheels at Wanaka was the brainchild of Wanaka developer Allan Dippie.

This year he expected records to be set with more than 20,000 visitors over the three-day event.

"People can’t go overseas because of Covid and so they are looking for events to attend.

"We get people come to this who have probably not seen anything like this before and are completely mesmerised by it," Mr Dippie said.

The event was also a way to showcase Wanaka and was great for local retailers, accommodation and hospitality.

"They have had it pretty tough with Covid but the nice thing about this event is that people don’t come for one day. A lot have been here for a week already and will be here for another week," Mr Dippie said.

"That is a fairly good injection into the local economy at a time it is needed."

It continues today and tomorrow.