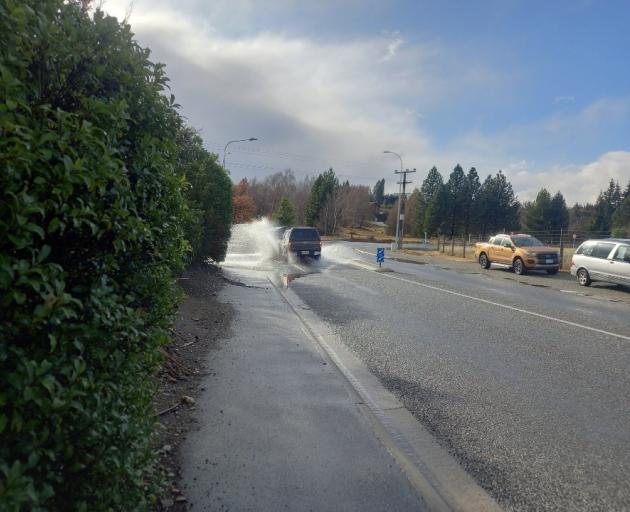 Wanaka residents say surface water forming on the corner of Anderson and Aubrey Rds when it rains "is not an isolated incident". PHOTO: SUPPLIED
When it rains, it puddles — creating a driving hazard at a busy intersection in Wanaka.

During snowfall last month, a 10cm deep puddle formed on the Anderson Rd and Aubrey Rd corner in Wanaka.

Wanaka local Mike O’Connor said the surface water generated by the snowfall was just one of many watery incidents at the site.

"Nine years ago I was on the community board for six years. It was a gravel road back then, and seemed to dissipate quicker, than it does now," he said.

He was concerned about the water hazard resulting in avoidable accidents.

"For cars going through the water there’s only a matter of time before someone gets T-boned," he said.

The puddle accumulated by the stop sign at the end of the Anderson Rd junction, covering the path by several centimetres.

"When it does rain there’s nowhere for any foot traffic to go," Mr O’Connor said.

The Queenstown Lakes District Council’s Three Waters and Capital Works teams are working on a design to improve drainage in the area.

A council spokesman said work to inform the design included investigations into the efficacy of the existing soak pit.

Upon review, it had been confirmed the existing soak pit was no longer functioning.

Geotechnical investigations were taken to understand the nature of the soils and capacity for soakage.

Analysis of options for the corner had identified localised soak pits with an overflow pipe as the best long-term solution, the spokesman said.

"Preliminary design work to determine the size and locations of the required soak pits found there were limited options for in-ground soakage within QLDC-owned land and or road corridors.

"We are currently negotiating with a nearby landowner about the possibility of installing soak pits on private land. These negotiations are ongoing and we will provide an update once we have more certainty on next steps."

At this stage there was not a timeframe for construction.